In our backyard, there are two small raised beds. Last year I tried to grow a few things, but nothing did very well. My tomatoes were weak, my zucchini plant had to be hand-pollenated (which I learned too late), and I grew two of the tiniest and saddest butternut squash you’ve ever seen.

This year things were a bit different. We actually put compost and fertilizer (worm casings) in our beds, which made all of the plants incredibly happy. Imagine that- the plants need food to grow! I should have known that last year, but I can’t say I know much about vegetable plants, or that I was trying very hard. I was determined to get good tomatoes this year though. There’s nothing quite as gross to eat as a mealy and unripe tomato from a grocery store. A fresh one from your backyard with some salt and pepper over cottage cheese? Mmmm….

My plants did so well this year, that two weeks ago I had an issue of what to do with the bowl of ripening tomatoes on my hands. 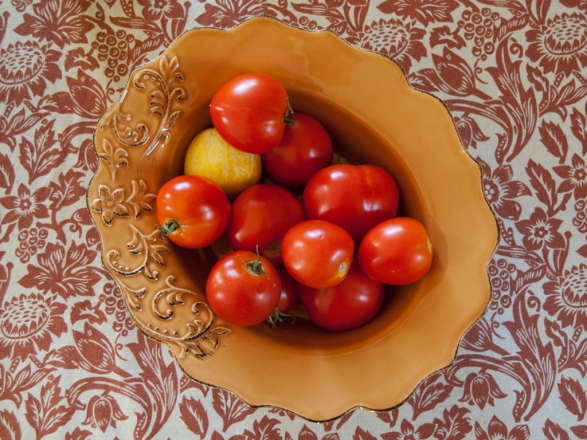 Excuse that tiny yellow lemon cucumber who snuck in there!

Sauce! Of course! I’ll make sauce, I thought. Not that I’d ever done this before, mind you, but I figured it would work out and I’d be set with a freeze full of bright red jars. I googled a recipe online and gathered up what I’d need for making what I was sure would be a large amount of spaghetti sauce. 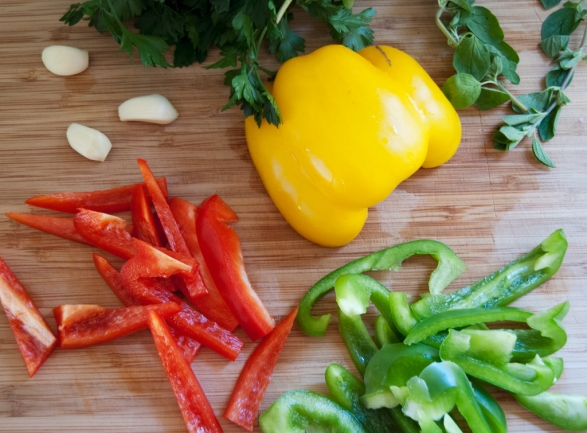 I’m that person in the kitchen who never really measures anything. I think I get that from my mom. She measures ingredients mostly by eyeballing them so she won’t have to wash an additional measuring spoon or cup, which is genius, because I HATE DISHES.

Does eyeballing your ingredients tell you how many quarts of sauce you’ll have? Nope. Did I wash a bunch of jars because I was really excited and then only use two of them? Yep. Were they only filled half way so that I could make it look like I maybe made more than I did? Of course. I was pissed I spent 4 hours in the kitchen for what ended up being a single jar of sauce.  *sigh* 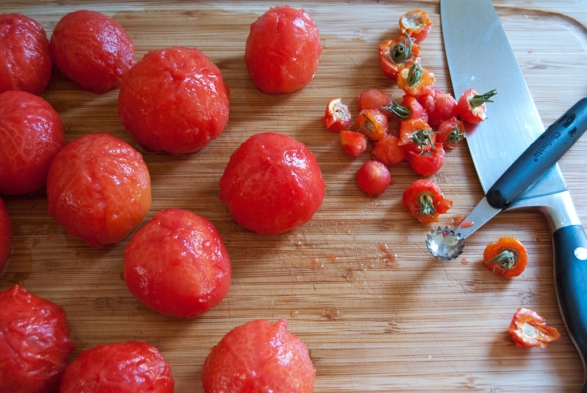 I did learn that next year I’ll need about 20 more tomato plants if my sauce-making dreams are going to come true. I also learned that the easiest way to peel tomatoes is to score the underside with an “X”, use a melon baller to scoop out the top, and then boil them for 30 seconds and throw them in an ice bath. I’ve tried this before, but scoring the bottom of the tomatoes and having the tops already removed made it a breeze.

The other thing I learned? That making your own egg noodles while your sauce is cooking is a fantastic idea. I also need to look at pasta makers online, because holy cow my arms were sore the next day. How do tiny Italian grandmothers make rolling out that dough look so easy?! 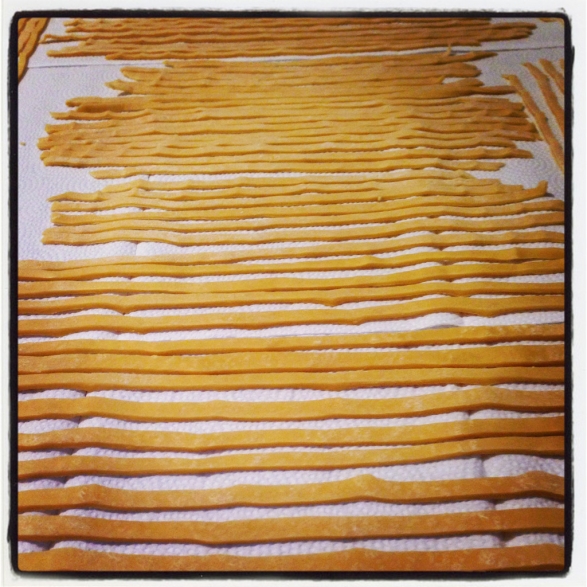 I have to say both the sauce and the noodles were really good, and I already prefer them over store-bought choices. I’d better make some garden notes and warn Rob that tomatoes will be taking over our yard next year! 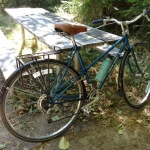 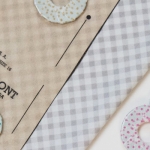