Life has been flying by. I honestly cannot believe how long it’s been since I’ve posted, but I decided to be nice to myself and not fret about it too much. There’s only so much energy that I have each day and I’m trying not to push it. I’m pretty much drained in the evening, even with taking a nap. That whole “second trimester energy burst”? Yeah, I’m calling bull crap on that, especially now that I’m beginning my third trimester. I have to take a nap every day so that I can keep my eyes open until 9:00 PM (but yes, everything is fine, I checked with my midwife). It doesn’t leave a lot of time for sewing!

I did finally start on a project for the baby. I’ve been focused on using my sewing time to make garments for my own dwindling wardrobe, but I wanted to start something tiny! I originally didn’t think I’d knit anything but hats for our little one, but a friend convinced me that I should knit at least one sweater. Hopefully the 3 month size I chose will get some wear out of it before the baby grows too much! 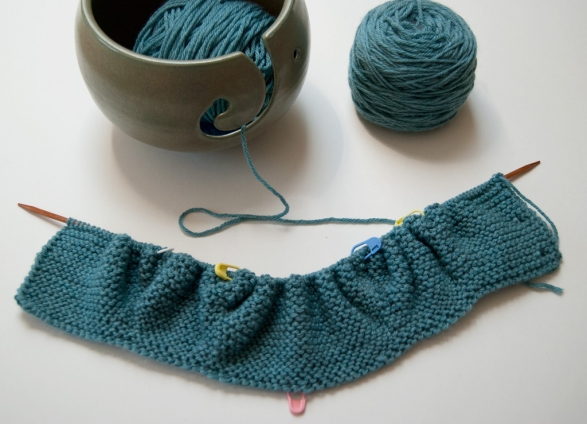 I don’t think I got to tell you yet. We’re having a GIRL! I was very excited when we found out, because LITTLE TINY DRESSES! BLOOMERS! SWEATERS! EEEEKK! My mind is swimming with things I want to make. It’s taking everything I have not to search on Etsy for vintage baby girl dress patterns. I knew that the sweater pattern I chose would need to be really easy, so I picked the Annabel Babe Cardigan. It’s all garter stitch, with simple increases. Hey, I’ve only screwed it up twice! Thank goodness it was easy to fix. This made for a perfect airplane knitting project for a recent trip to Indiana that we took.

I picked up the yarn at Close Knit. It’s Cascade Yarns 220 Superwash Sport in color number 1910. I love stitching with merino wool. It works so smoothly on the needles and always blocks nicely. The color is a really lovely greenish-blue, and while picking it out I instantly thought of all of the vintage buttons I have that would go well with the color.

There are these sweet tiny pearl buttons…

Or maybe these prancing ponies…

But my favorite has to be these Czech glass hearts…

I’m going to change the pattern a bit so that I only use 3 buttons. Mostly because I know I’ll never button her up all the way in a wool sweater, but also so that I can save a few buttons to put on a matching dress. Am I getting a little crazy yet? It’s going to be amazing.

As far as sewing for myself, I’ve adjusted and created patterns, washed and cut out my pieces, but only sewn up one maxi skirt. Tomorrow is a sewing day, so I should have much more to share soon! There are currently 2 shirts and a dress sitting on my table, begging to be stitched.

Before I was pregnant, I was mostly a jeans girl. Let’s just say this about maternity jeans though- they are horrible and should all be burned. Do you like it when your pants fall down every other step and you end up penguin-walking because your crotch is practically between your knees? Me neither. I tried on several pairs by different brands but none of them were very comfortable. A friend had given me a fold-over waistband skirt, which I quickly copied. It feels so much better than pants! 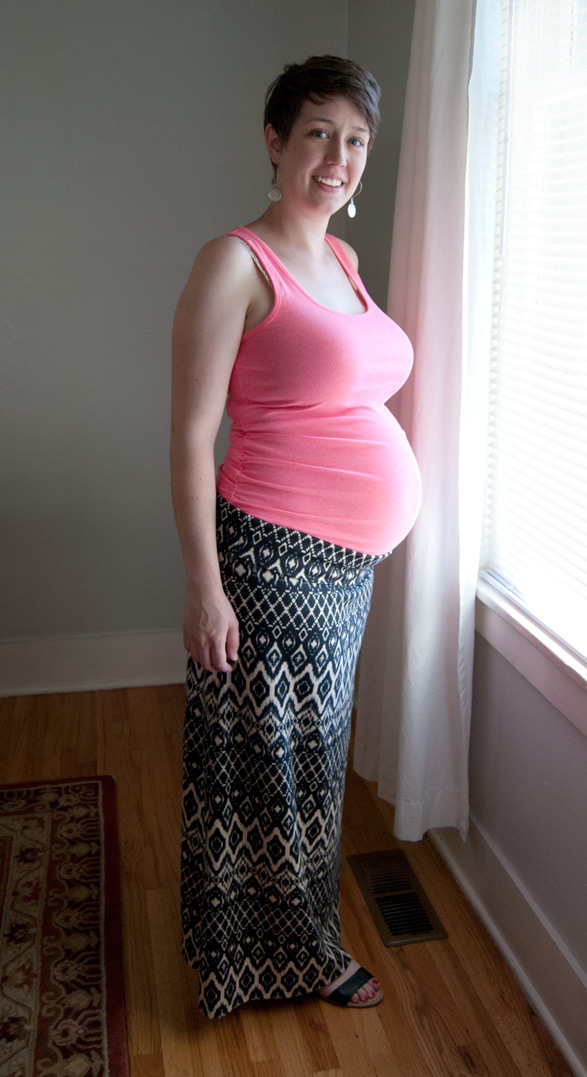 I got this particular fabric from Girl Charlee. I had to return my first fabric order from them because the knits I chose were too thin. On my second try I went for the Ponte de Roma knit though, and hit the jackpot. I chose this black and white print so that I could wear it many times over with different colors of solid shirts. I baaaaarely ordered enough yardage to match up the pattern on the side seams, but there was no way I could let that go, even if it meant making the skirt a bit more straight than I originally intended. 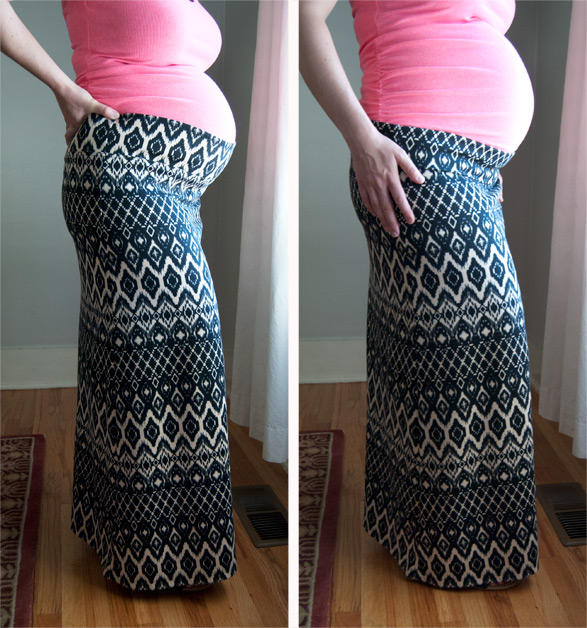 I have worn this skirt both with the waistband up (and a shirt over it) and with it rolled down (and my shirt tucked in). I prefer it rolled down. It may be kind of nice as it gets cooler to have my belly covered up a bit more and to leave it unrolled. Either way, I’m going to keep making these, because they’ll be great to wear post-partum too.

So, I have two questions for you. Which buttons would you choose for the cardigan? Also, would you be interested in a tutorial for whipping up a quick one of these skirts for yourself? I promise they look great on non-pregnant ladies too! 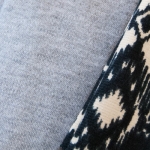 Newer post: How to Make a Maxi Skirt, Pt 1 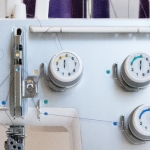