I promised you some photos from our trip that we recently took early this fall, and whew… there are so many photos. About 2,000 actually, but I won’t make you look through all of them! I will definitely share a lot of the garments and costumes with you that I saw, because they were all incredible, but here’s a look at how our trip started out.

We began by flying from Portland to Chicago and then to Dublin, Ireland. We landed at 8:00 AM, and even though we didn’t really sleep on the plane like we were hoping to, we were excited to get going and headed straight out after dropping our bags off at our B&B. Our taxi driver, who was literally the oldest cabbie in all of Dublin (he was very proud of that) told us to head to the Temple Bar area. It was easy to walk to and right around a few other sights we wanted to see. 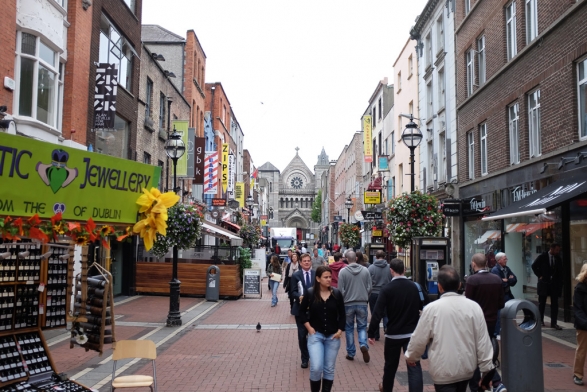 The little streets and shops were adorable, and I couldn’t get enough of listening to everyone talk. I tried my best to not speak with an Irish accent, but it’s so hard when it’s all around you! We walked around, had a pint of Guinness and then found Dublin Castle and St. Steven’s Green, a lovely Victorian park. Next we went to Trinity College to see the Book of Kells and the library, which was amazing. 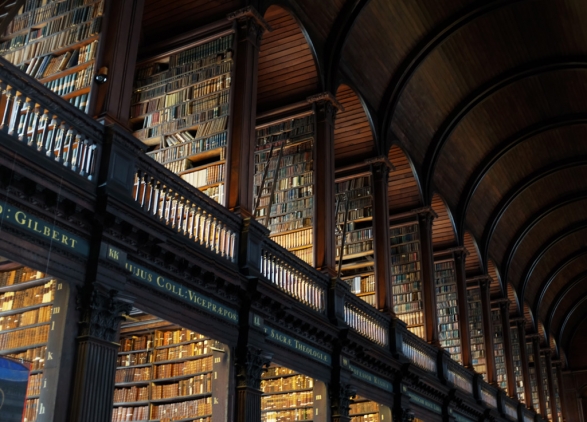 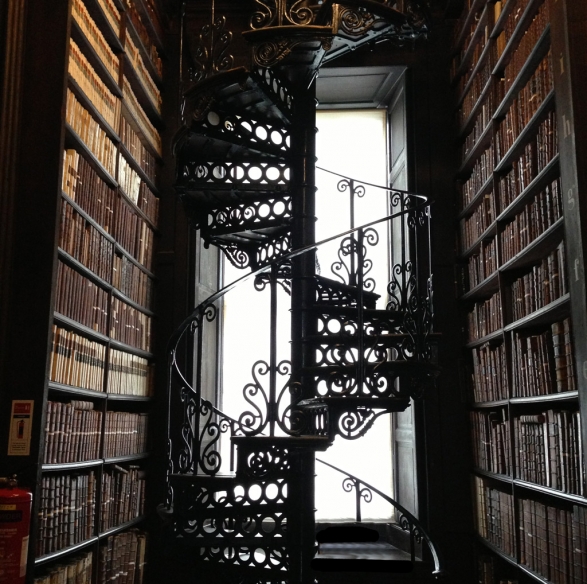 The ceiling of the library caught my eye. The curved roofline and the light playing off of the wood slats created a really beautiful ombre effect. 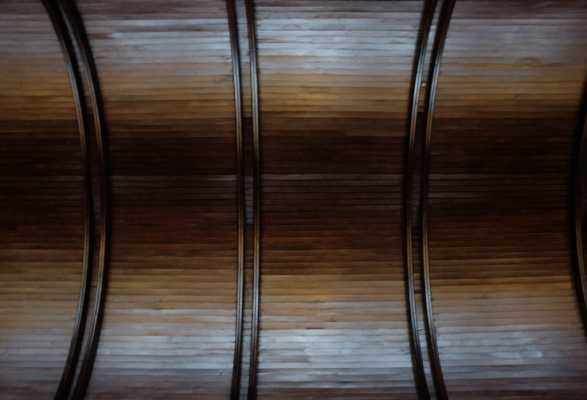 After a bit more walking, we crashed. Our brains were buzzing and we knew we couldn’t make it much longer without some sleep. As much as people tell you to power through the time change, whoa. That was not going to happen. A 2-hour nap was required, and then we went out for dinner and walked around a bit more. I fell in love with all of the painted doors. If you only have one way to differentiate your house from all the others in a long row, I guess that’s it! It was quite colorful and very charming to see street after street of brightly lacquered entrances. 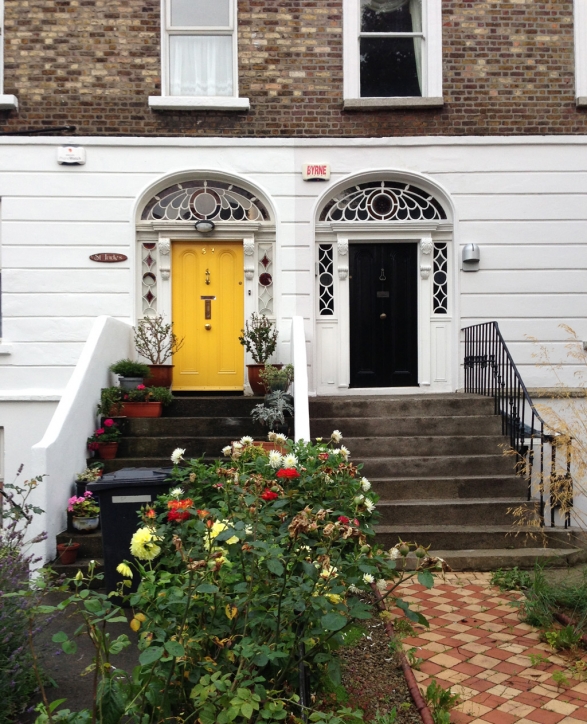 We only had one day in Dublin, and the next morning we flew to Glasgow. It was a quick trip and once we were there, we picked up our rental car. This is where I started to get nervous. Rob was doing all of the driving, but if you were expecting me to not panic about riding on the opposite side of road, then you were wrong. I did my best to close my eyes and not make comments, squeals and sudden “oh-my-gosh-we’re-going-to-die” noises, but it happened. Luckily, Rob is used to ignoring me while driving, and once we were on the highway it felt just fine. It actually made more sense, if anything. Cars merged with no problem, traffic circles/roundabouts ACTUALLY WORKED and everything went smoothly.

Our first stop was the city center of Glasgow, where we had lunch and, of course, walked around. I saw very tall towers and marched towards them, to find the University of Glasgow. 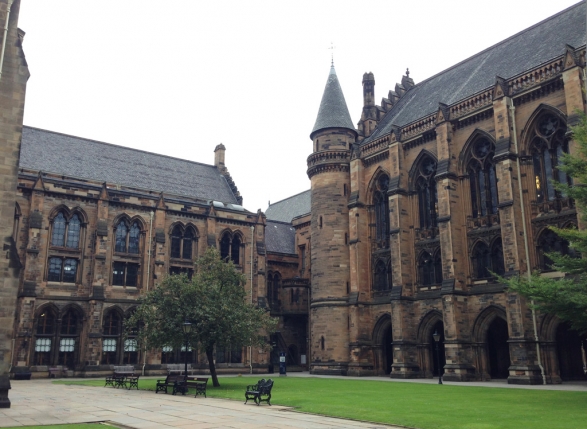 The main campus we saw has only been there since 1870, but the college was founded in 1451. I’m not shy about waltzing into buildings that I know nothing about, so we found a church, some offices, and eventually the Huntarian museum, which was quite a treat. The daylight was beginning to wain though, so we headed to Embsay, where we had reserved a room in a little English countryside cottage.

Do you know how long I’ve wanted to go to England and stay on a sheep farm? I could hardly sit still. Sheep! England! Tea! Sheep! Our GPS took us on a very, very narrow road into the little village of Embsay, which looked like a painting. Small stone houses, two pubs and winding roads were surrounded by vast green patches of land, dotted with white specks of grazing sheep and divided with stone walls. 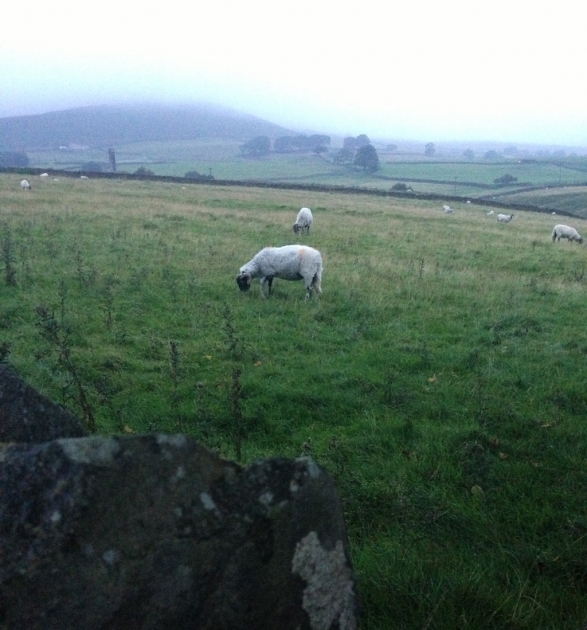 It was so beautiful. We pulled up to our cottage when the sky was dimming and full of deep gray-blue clouds, and everything had a foggy, eery cast to it. It felt exactly like a rainy Portland evening.

I couldn’t even stand still long enough to take a centered photo of our bed and breakfast. I was so happy and excited to be there!

The house was exactly as I had pictured it would be, and the owner, Liz, was so very kind. She cooked beautiful breakfasts for us every day, and told us stories about the area by the fireplace at night. Her two Labradors were as sweet as could be and I loved every second of petting them. And in the mornings, I got to walk out and try to convince the sheep to let me pet them as well, like a crazy woman. How could I not?! 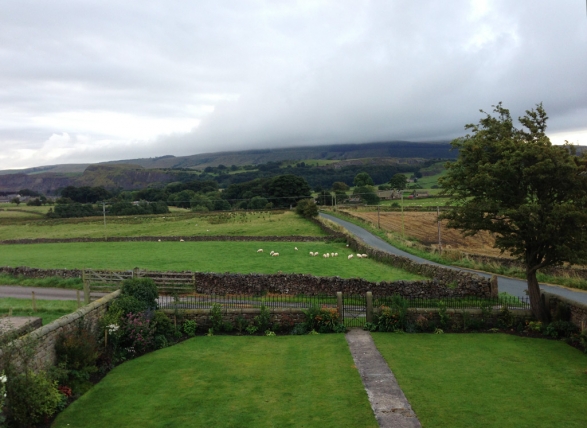 They never fell for it. Not once. I don’t care though. I would haven’t trusted someone as excited as me either. I’m sure Liz laughed and shook her head at me, but I had to at least try!

The town of Skipton was near our little cottage, so one morning we headed out to see what was there. Just more adorable little buildings and cute shops, of course! We wandered around a market, looked in a few shops and then headed up the road to Skipton Castle. 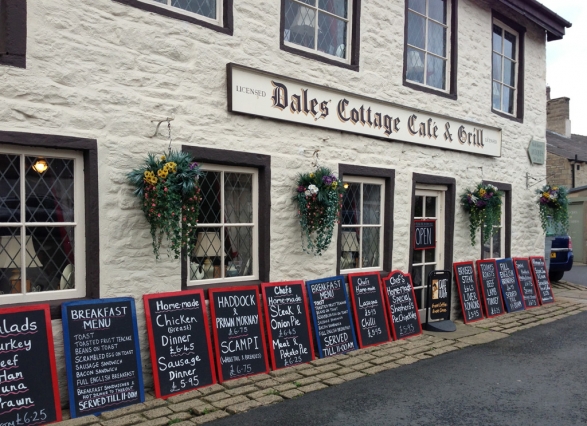 The castle is over 900 years old and is one of the best-preserved medieval castles in England. You can walk all over it, from the bed chambers and banquet hall, to the kitchens and the dungeon. The yew tree in the middle of the courtyard was planted in 1659 by Lady Anne Clifford, who was born there in 1590. 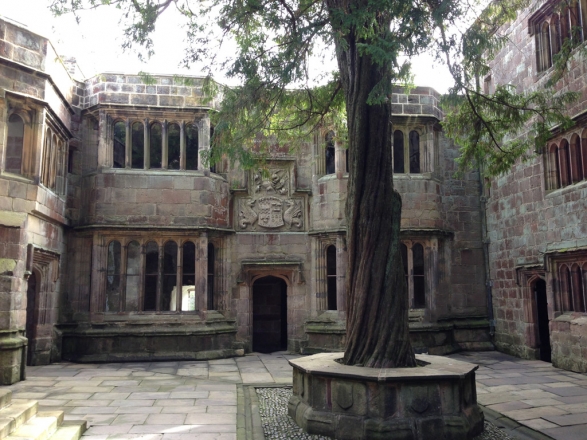 After our tour of the castle we drove over to Bolton Abbey, which is owned by the Duke of Devonshire. A hole in a tall stone wall showed us a magnificent view of the cow field we had to walk through to get to the abbey ruins. Go ahead and click that photo to get the full effect of those rolling hills! 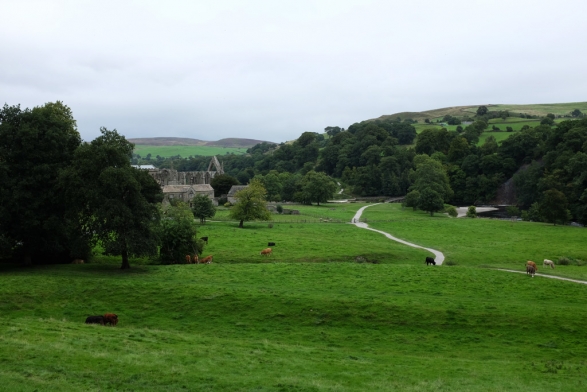 A group of school children were on their way to the abbey, so we decided to take a hike around the property and save the abbey for last. We saw a pheasant, more amazing views of the countryside, and a peculiar tree on the trail that was completely covered in coins. I have no idea what the meaning of it all was, but it was certainly interesting. 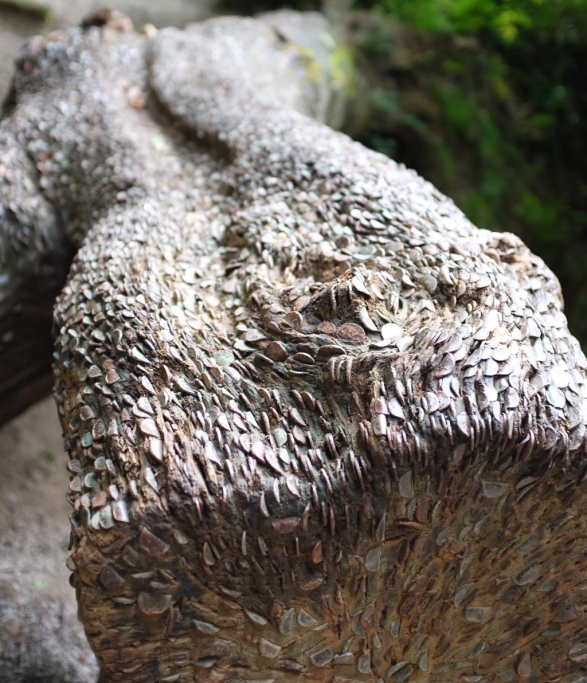 The walk took us on a long circle up a hill, across a river, and straight up to an ice cream shop. How handy! Next door was the cutest little house ever, and I labeled it as my “someday I will build that in the woods of Oregon and everyone will think it’s haunted” house. 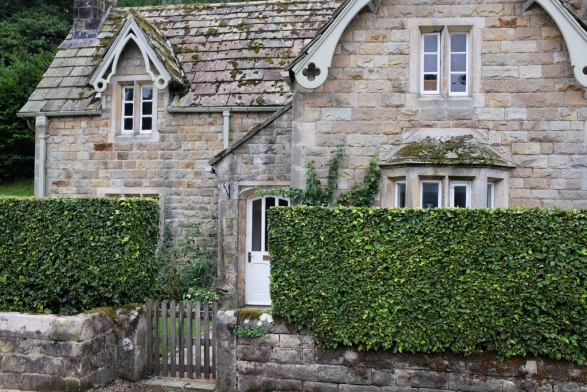 And then more fields and more cows… 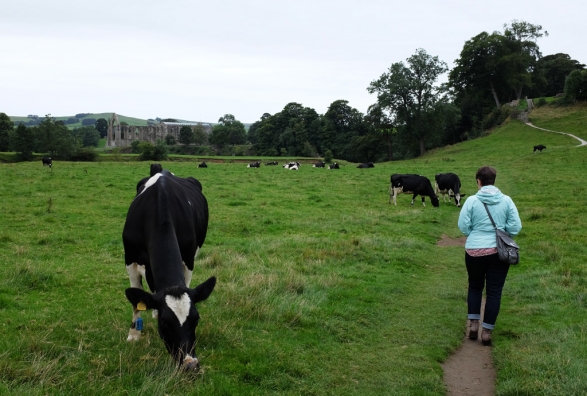 …until we reached the abbey herself. 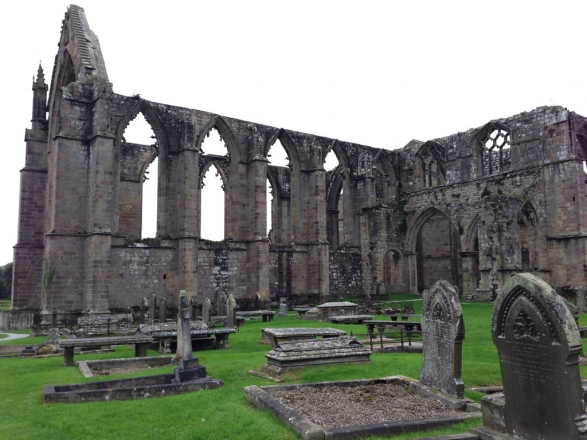 The history of the abbey is quite extensive, and a kind tour guide told us all about it. Being in a place that was started in 1120 felt unreal. The amount of history within those walls was astonishing.

We were pretty tired from hiking and walking around all day and decided to head back to Embsay to get ready for dinner. The sights on the way home forced us to pull over and take another look around though. Plus, this guy looked so handsome against that backdrop, I couldn’t help myself but snap his picture. 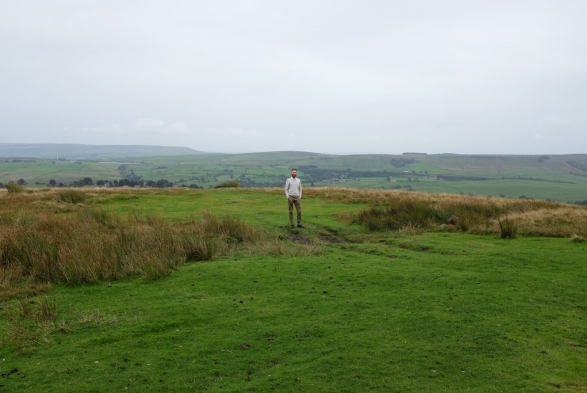 The next day we took a trip to York. The ringing of bells lead us to York Minster, where we spent the majority of our morning. The church was started as a wooden structure in 627, but the present building wasn’t completed until 1472. It is a massive structure of white limestone, and it towers above every other building. 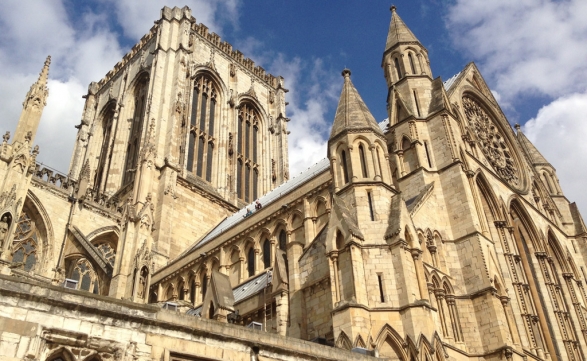 My favorite part of the church was not climbing up to the top of the main tower (oh, my poor legs) but looking straight up at the ceiling of the Chapter House. I saw a giant quilt waiting to be appliquéd! 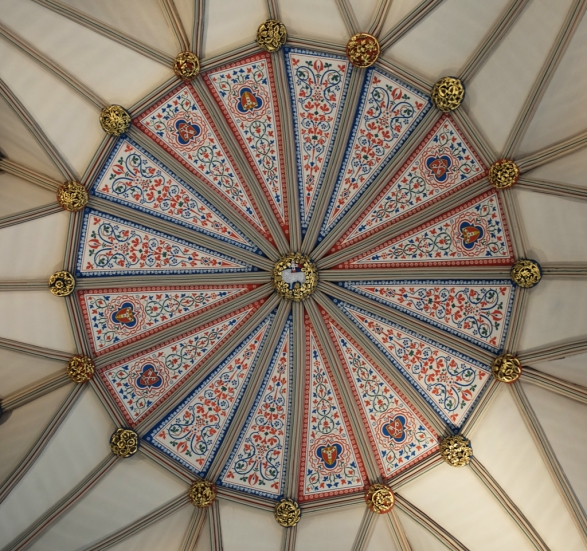 There were many examples of exquisite hand work that I noticed. This little crewel wool tiger certainly stood out and caught my eye. 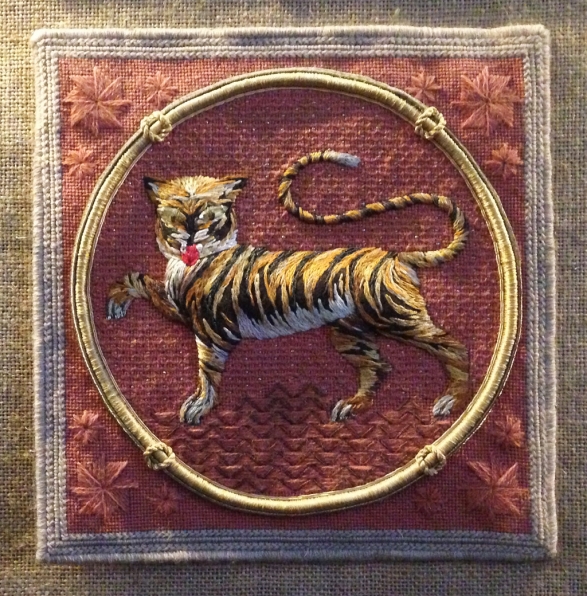 The city of York had miles of streets that jutted out from around the church. The timbered houses labeled with dates like 1437 leaned precariously over the cobbled streets, and the shops on their bottom floors were often made up of many tiny rooms. We ended up buying sweaters because it was much colder than we had anticipated, and after purchasing those we got back in the car to drive to Leeds.

The only reason we decided to go to Leeds was to eat at Prashad. Wow, was it worth it! If you love vegetarian Indian cuisine, you must check it out. It was amazing, and we brought home a cookbook to try to make the recipes ourselves. 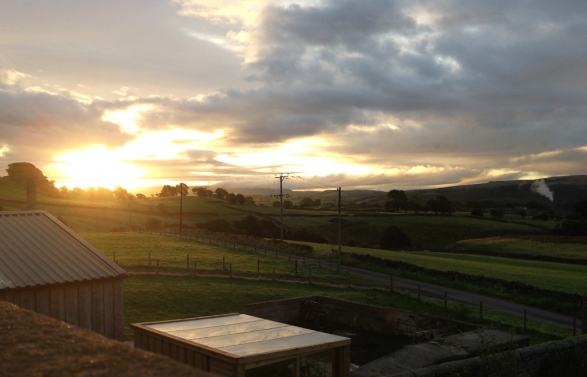 After a beautiful sunrise the next morning, and bit of time relaxing and journaling, we set out for London, which I’ll continue with in another post. There’s so much more to share! 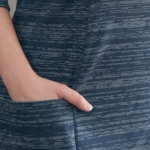