And so we started off on the longest road trip we’d ever been on together. I would like to take a moment and say that the three boxes of Girl Scout cookies my best friend Amanda gave us lasted the ENTIRE trip. I’m certain that’s a record, because we bought some from a young girl at Fabric Depot just the other night and they’re disappearing veeerrry quickly. 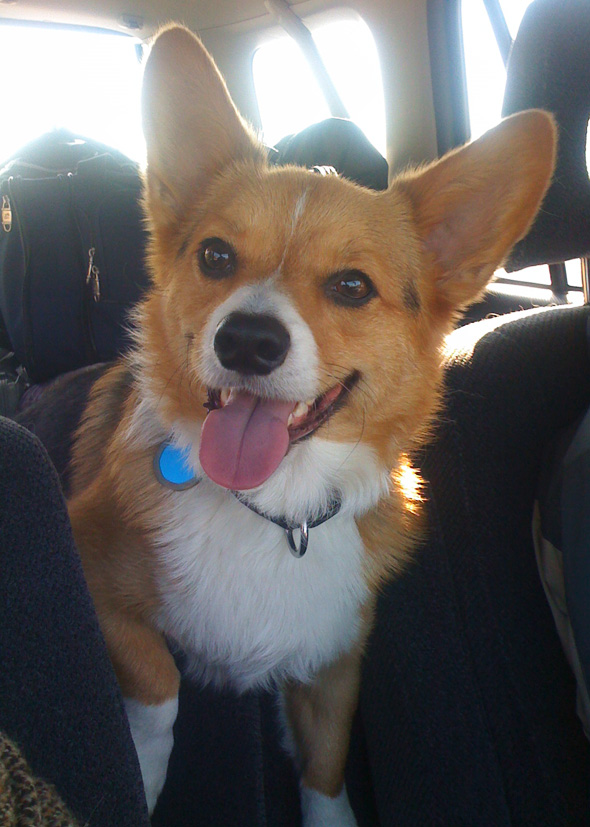 Who wanted to share those cookies as we made our way thru Illinois, Missouri, and Kansas into Colorado? I’ll give you two guesses- he’s cute, furry, and has very hard-to-resist puppy eyes. Also, his breath was rockin’, because he wouldn’t chew his bone in the car. Rolling the windows down during the winter because the car is full of hot dog breath kind of sucks.

And Duncan, oh poor Duncan. He was stoned on kitty downers for the better part of the trip, or else he would cry the most terrible cry the entire time. We tried letting him out of his carrier, holding him, anything else we could think of, but keeping him sedated was the only way to keep him calm. Being a mess for leaving behind all of our furniture, house and family and friends was hard enough, and watching him with his crossed eyes almost made me turn back into a ball of crying mush. 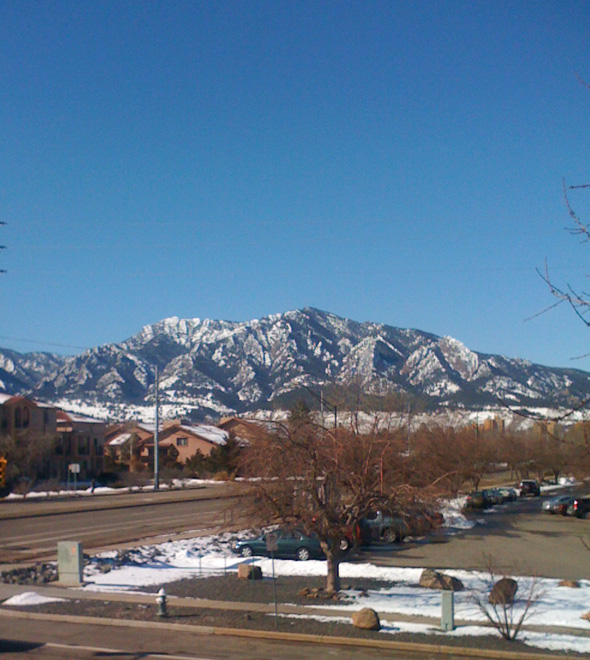 But we moved on, driving 12-16 hours a day, stopping every so often so everyone could stretch and we could marvel and how BORING places like Kansas are to drive thru, at least when you’re taking a main highway. We finally landed in Boulder, Colorado, late one night and crashed with friends for a few days to get a break from the road. Boulder was an incredibly beautiful city, and Rob and I chalked it up as our second choice if Portland didn’t work out!

When we got back on the road, we heading thru Wyoming and Utah on our way to Boise and more hills started to appear. Lodges were stamped with figures of bison, and an incredible sunset gave the mountains in Utah the prettiest pale pink glow. 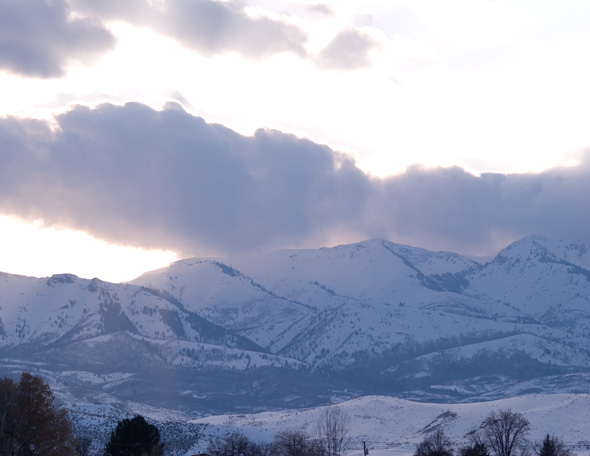 And I think that’s when I finally started to get excited again. Seeing these landscapes and stretches of mountains made me feel nervous, excited, anxious, but ready. Ready to move onto Oregon and finally see our new home! 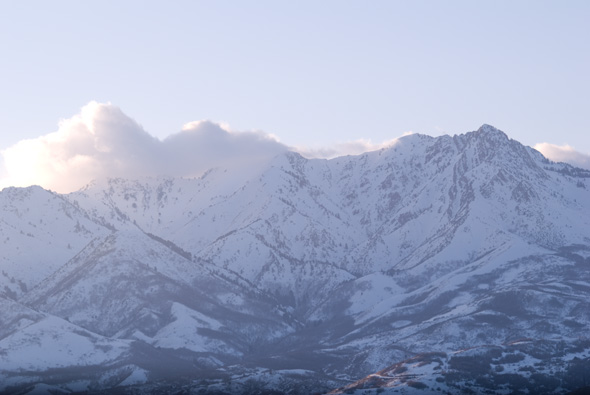 The hills in eastern Oregon were quite different from the mountains in Utah and small hills in Idaho. Oregon started out with a few pine trees, then turned in a desert, and went back to having lots of hills and greenery. It felt odd to see so much change in the landscape, because in Indiana it was one thing… flat. And I had been lead to believe that Portland itself was as flat as Indianapolis was, thanks to Rob’s joking around (which he had forgotten about). 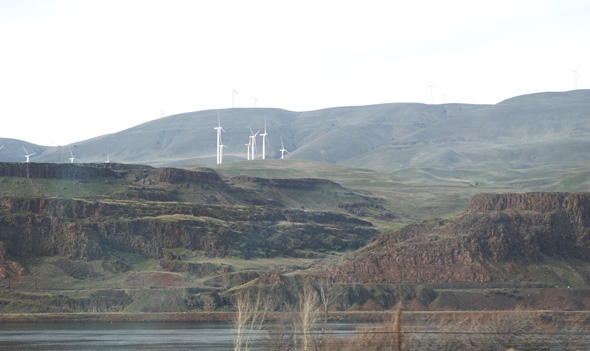 Me, as we’re going thru the Columbia River Gorge: “When does it start to look like Indiana?”

Rob, with a very confused look on his face: “What are you talking about?”

Me: “You told me Portland was flat like Indiana.”

Rob, laughing at this point: “What? I don’t remember that- I must have been joking. It’s nothing like Indiana, dear.” 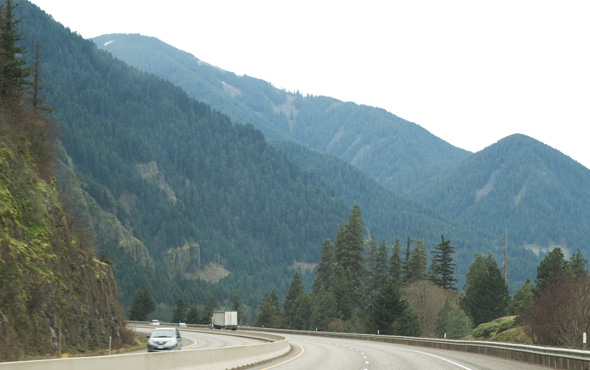 Don’t worry- I punished him by singing songs from the Sound of Music. Repeatedly.

After another hour or two, we were suddenly pulling into our new home. An apartment in NW Portland, with Forest Park a stone’s throw away. We had to make an IKEA and Target run since the cube of all of our belongings was going to be 2 days late, but the next day we got to take a lovely walk in the park. I’d never seen anything so green during the month of March in all my life.

And that was it. I was in love- we both were. 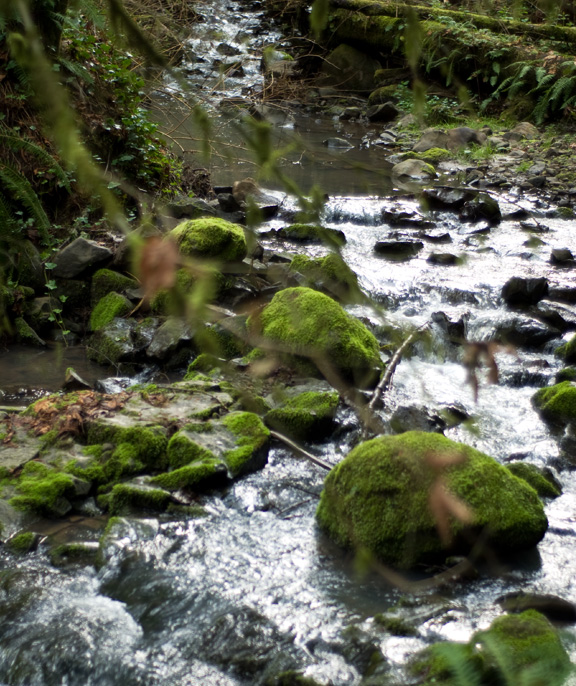 Since then, Rob’s taken on a different job, I started working for the hilarious women of Modern Domestic and teaching, and Portland has turned out to be the perfect place for us. I couldn’t be more amazed at how well everything worked out, and to me that means we were meant to be here.

When I re-read this, I think back to how I didn’t think we could make friends match those we had in Indiana. Not only did we easily meet lots of people here, they’re generous, funny, and really good people. No one will ever replace our friends back home, but it feels good to know that there are so many people here we can lean on and laugh with. With our super rad friends, Jim and Ravyn, moving out here this fall, it can only get better.

I can’t wait to see what our second year in PDX brings us. I’m so grateful for everything we went thru to get here. It made me see that all of the material things I thought I couldn’t live without weren’t making me happy. I walk the dog more, cook healthier food, and spend more time making things than buying things. I hope Portland continues to inspire me to be better, and I hope I’m able to share that with you here. 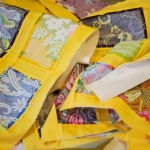 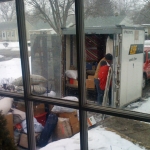