I’m not quite sure what it was that started the craving for my Grandma’s pie. Maybe it was seeing everyone baking lots of rhubarb on various blogs, but I had to have rhubarb pie, and it had to be her recipe. Any pie that wasn’t filled with rhubarb and custard or covered with a slightly sweet and wonderfully textured meringue wasn’t going to work. 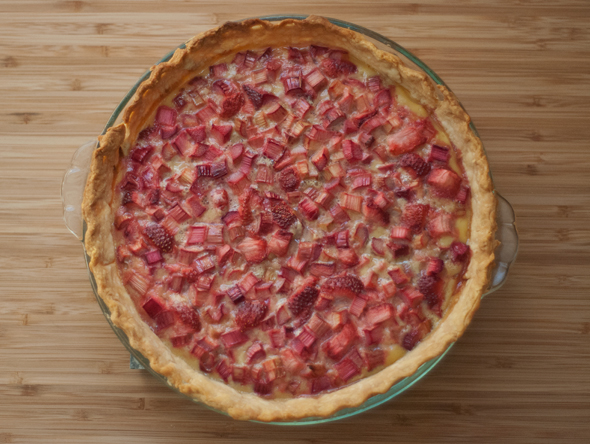 I made the round of phone calls home. When I spoke to my Dad on the phone, he let out an “ahh” of recognition, and I could tell he was wishing he had some of that magical pie too. He couldn’t find the recipe though, so after a few more calls by both he and I, my Mom was able to tell him which cookbook she had my Grandma’s recipe hiding in. I made it my first priority the next day to go buy rhubarb, because I wasn’t going to get anything done until I’d made that pie. 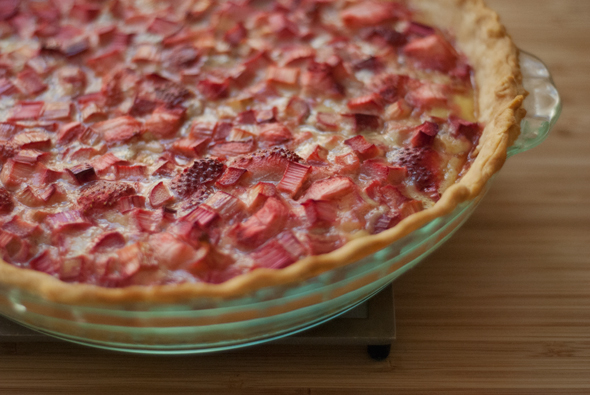 I didn’t buy quite enough rhubarb, so I threw a few strawberries in too.

Let me tell you about this, the custard and rhubarb. If you’ve only ever had a traditional rhubarb pie that’s simply a thick fruit compote, I’m sorry. Rhubarb baked in a light and creamy custard with the right amount of sweetness is heaven. It’s a race to see who can get the coveted pieces of rhubarb pie at our family gatherings for a reason! 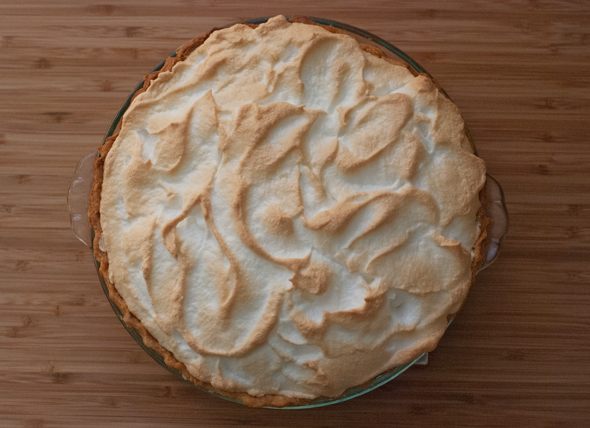 And meringue! Oh! Don’t ever top your rhubarb with crust again! The simple textural difference between the velvety custard and the light, airy and melting meringue is what makes this perfect. I would try to save my meringue topping for last as a kid, but now I know I was doing the pairing an injustice. 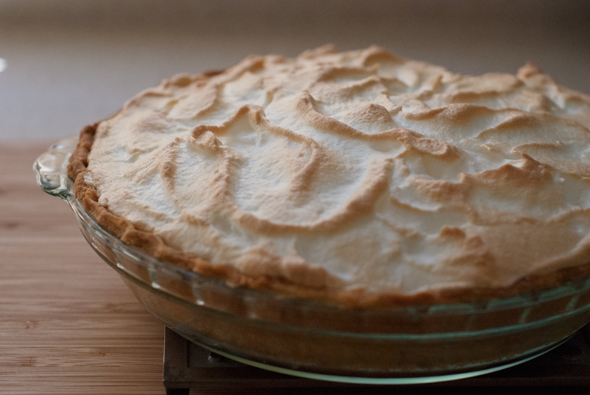 When you do make this, make the crust as thin as possible. You don’t want to give the pie ingredients any kind of competition. I made my pie crust as close to 1/8″ thick as possible. I use this recipe from Taste of Home, but be sure to cool your dough! Shortening in pie crust doesn’t need much coaxing to warm up and fall apart.

Clean and chop the rhubarb into small pieces and pour into the prepared pie crust. Mix the sugar, flour, salt, evaporated milk, vanilla and egg yolks together and pour over the rhubarb. Bake for 10 minutes at 450°, then lower the temperature to 350° until the custard is set (test with a knife).

While the pie is baking, prepare the meringue. In a glass bowl, mix the egg whites on high speed until soft peaks form. Slowly add in the sugar, one tablespoon at a time, until stiff peaks form.

Once the pie is done baking, immediately top with the meringue. Make sure the meringue reaches and touches the edge of the crust. Place the pie back in the oven and bake until the top of the meringue is nice and brown. Cool the pie completely before storing in the fridge. It’s best served cold. 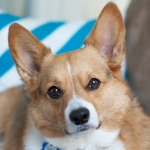