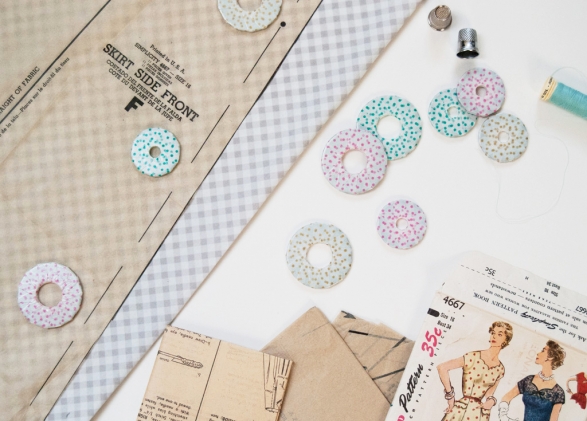 After I posted my pattern tracing tutorial, there was a bit of conversation in the comments about pattern weights. The ones that I used in my tutorial weren’t actually pattern weights- they’re old drapery weights. I “inherited” them, if you will, after one of my neighbors passed away, and her daughters gave me a few bits and pieces from her sewing box. They have worked well, but I don’t have very many of them, and they’re quite ugly. I’m also pretty sure they’re zinc… but there’s a slight chance that maybe they’re not. I’m kind of doubting they’re lead, but after really seeing what I was using, I thought I should do something about it.

You know how it is, right? You use something for a long time and you forget that it wasn’t its intended purpose? Or that it’s hideous? I know we all have those burnt potholders that we hide at Thanksgiving and a dirty pincushion that should probably be pitched.

I wanted pattern weights that were inexpensive, but also really cute, and that didn’t take up much room. The little bean-bag weights are nice, but I need lots of them, and those would soon fill up my sewing toolkit. I decided on large and small washers. It’s what I’ve used on the cutting room floor and they’re easy to find. 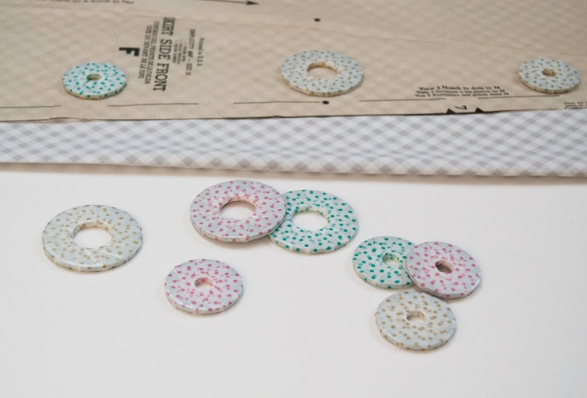 You could just buy heavy washers from a hardware store, wash them and call it done. No judgment here! You could also buy the washers, wash them, and then spray paint them in the color of your choice. I almost went that route, but I couldn’t find the perfect mint color I wanted. Picky, picky, picky.

That’s when I remembered washi tape! I’ve always wanted an excuse to buy some of this tape, but hadn’t come up with a need for it yet. NOW I HAD AN EXCUSE TO GO CRAZY. I headed down to Collage and picked up a few polka-dot tapes, and then went to Home Depot for both washers and clear lacquer spray paint.

To make these pattern weights, you’ll need paper scissors, washers, washi tape, a pen that will fit thru the eye of your smallest washer, and spray lacquer (not pictured). You could probably use Mod Podge if you don’t want to buy lacquer, but now I get to make EVERYTHING SHINY. Seriously, I got bored waiting for it to dry and sprayed some bricks outside. And a stick. And maybe a small part of the driveway. I think Rob’s shoes are next on my list. 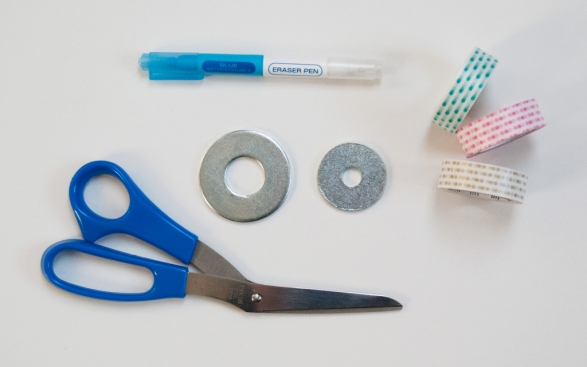 Wash the oil off of your washers if they’re particularly dirty. I was lazy and did not do this and the tape stuck anyways. Start your tape on the side of your washer that has the more-rounded edges. This will be your “front”. Let a small bit of the tape hang over the edge of the washer into the middle. Clip this so that the tape folds down into the middle circle easily. 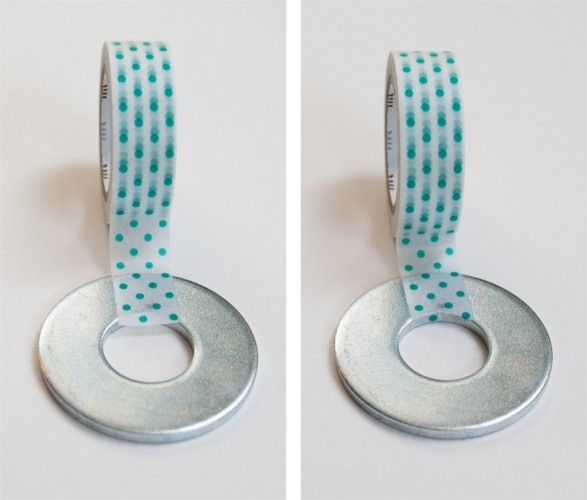 Flip the washer over and cut off the tape after you have enough length for it to hang over the edge of the middle cut-out again. Make the same small snip in the center of the tape, and fold it down. On the top edge, crease and smooth the tape so it follows the curve of the washer. 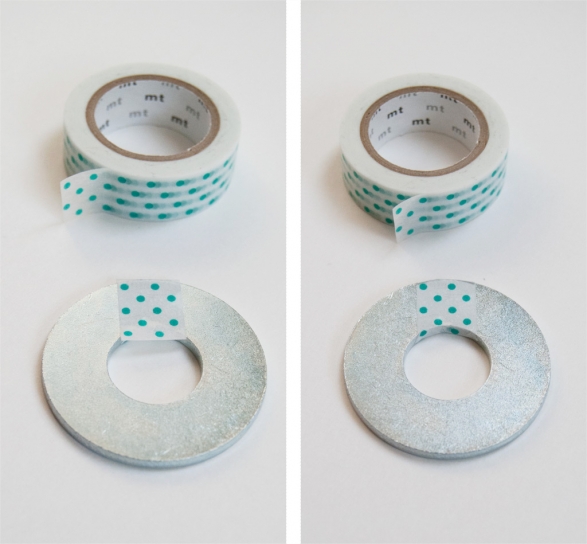 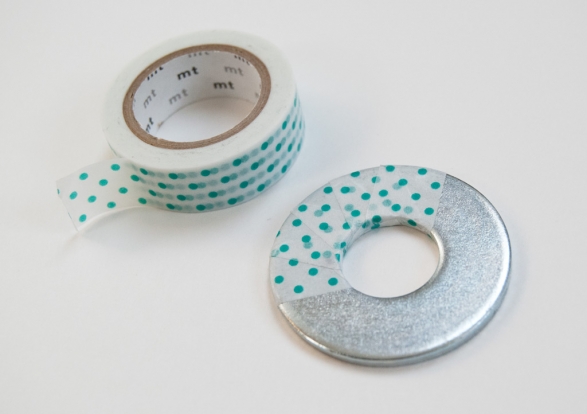 I personally wanted  to have different sizes of pattern weights, in the case that I’m cutting out a very small pattern piece. My finger would not fit into the middle of the smaller washer, so I found that my Clover marking pen was the perfect size for smoothing out the tape on the inside edge. The smaller washers should be wrapped the exact same way as the larger washers, but you’ll need to help of a pen or other small tool to get in the middle of it. 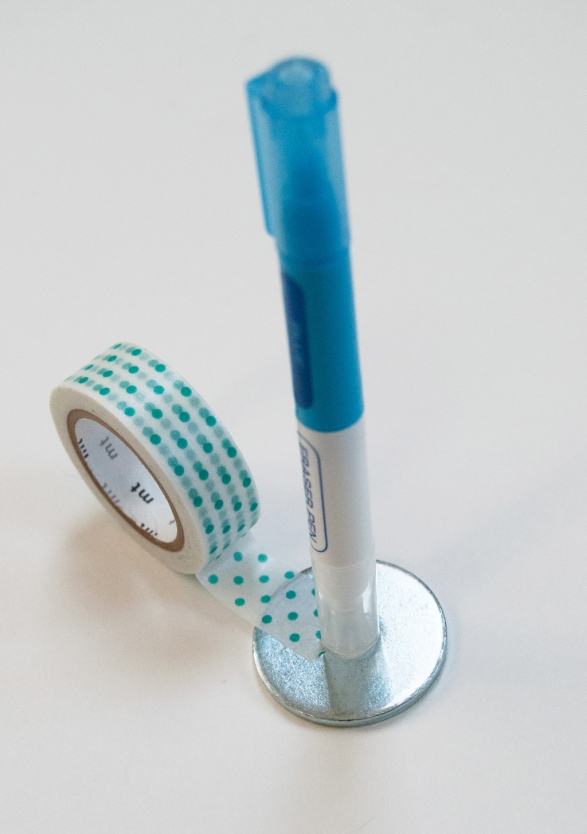 After all of your washers are wrapped, give them a few good coats with the lacquer. I sprayed mine 4 times, and I may do more, so that they have a nice thick glossy look. When I sprayed them, I did smooth the edges of the tape a bit more to make sure they didn’t peel back and stick up. 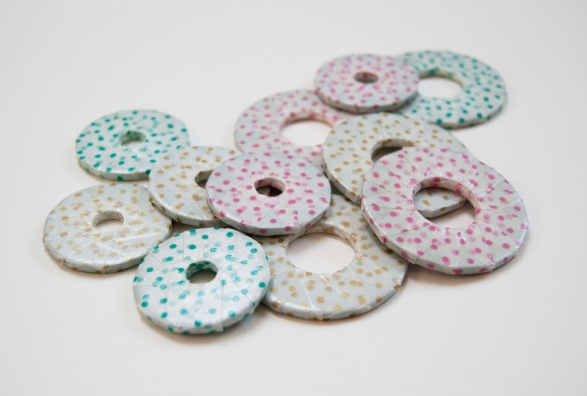 The only downfall of my new cute pattern weights? They make me constantly crave tiny sprinkled donuts or frosted animal crackers. Even so, I love them! 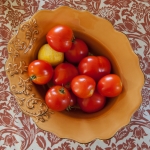 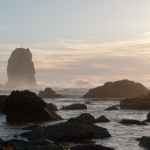