I’m currently out of town, visiting my family and drinking waaay too much coffee to keep up with the time change. Before I left Portland though, I made sure to finish a baby gift for a dear friend of mine. Her little boy was born a few weeks ago, so my gift to him was bit late. I don’t think tiny baby Theo will hold it against me though!

Usually when I make a quilt, I buy the fabric first, and figure out the pattern I want to make later. It’s pretty rare that I find a pattern first and then buy the fabric. That might be because I really don’t buy patterns at all. I feel like a cheater when I use one, as if I’m not being as creative as I could be. I don’t know why I tell myself this, because it’s ridiculous. But nevertheless, I picked up some fat quarters of the Indian Summer line, and some yardage of an Architextures print at Modern Domestic.

I was telling myself to make something that wasn’t too complicated since I have a lot on my plate right now, but I don’t listen to my own brain. I knew that I wanted to use half-square triangles (HST). I didn’t really have a plan for them, so I played around with the layout until I came up with nine different blocks. 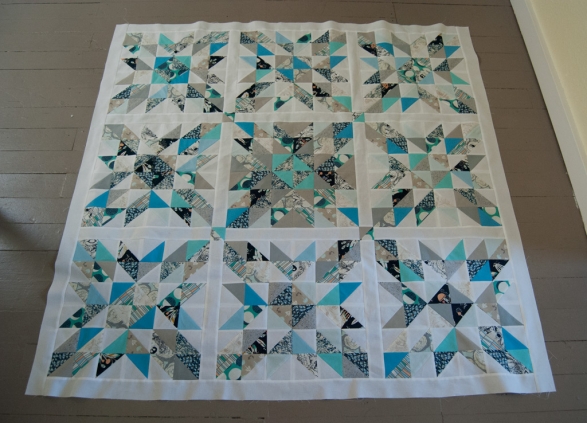 Does anyone know what this block is called? I’m certain that I didn’t just make up a completely new and never-before-seen block. Each one uses 72 different triangles, and the white fabrics in the middle of each block make up a star. 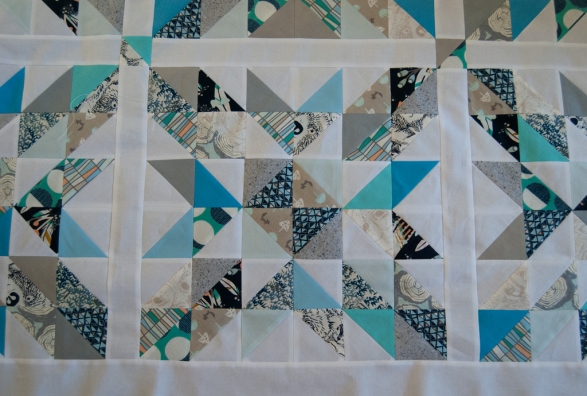 Because of the tiny woodland animals, I wanted the quilting to have a Pacific-Northwest feel to it. However, trying to make little pine trees all over the quilt looked like Christmas, so I took a different route and just did meandering loops. It was much easier to do, especially once I remembered to lower my feed dogs. Does anyone else forget that after they haven’t quilted for a while? My stitching looked fine, but my arms were tired after one pass thru the machine! 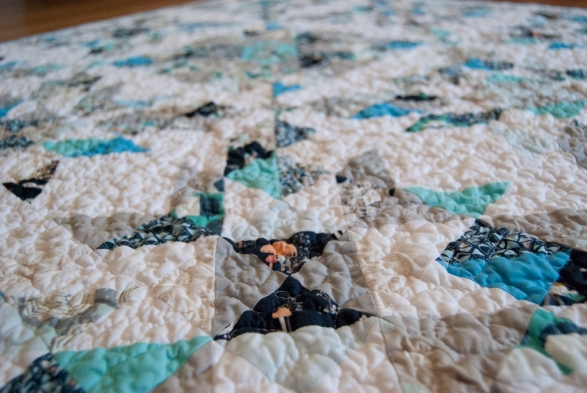 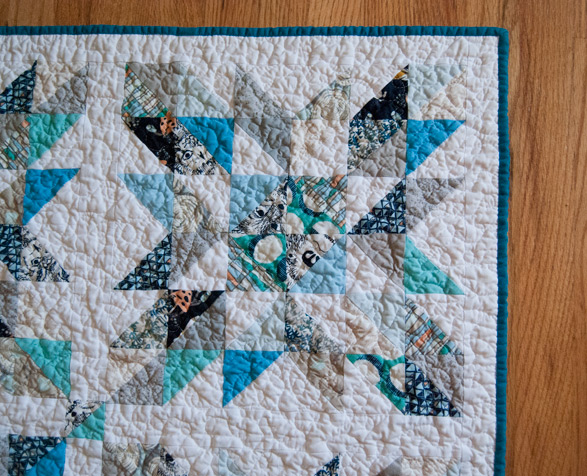 The batting I got from Modern Domestic (I can’t remember the brand name) and it puffed up and seems to have become thicker after washing the quilt. It’s incredibly dense, but soft and heavy at the same time.  I really like it, although it made the quilt more crinkled and lofty than I was expecting it to be. That’s not a bad thing, especially when it should be extra-soft for Theo to lay on. 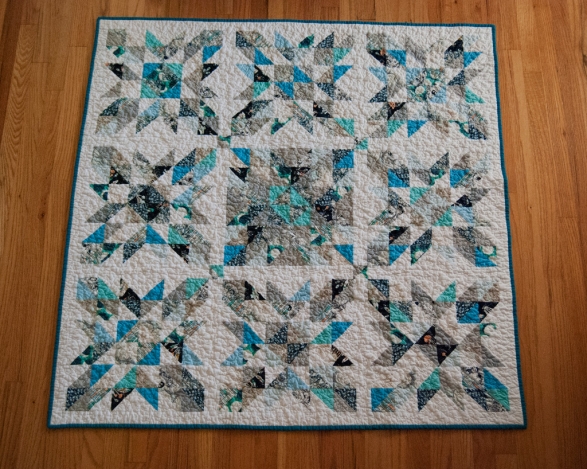 I used a solid teal from my stash for the binding. I hardly ever hand-sew the binding on, and this quilt was no exception. I know that some quilters consider hand sewing the binding to be their favorite part, but usually at that stage I just want to be done. 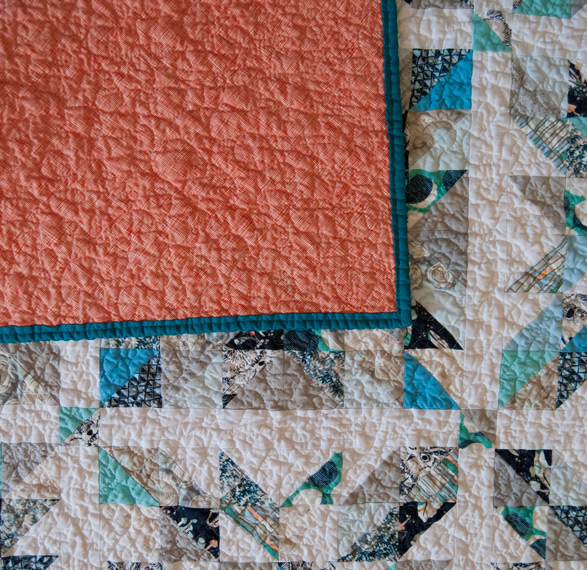 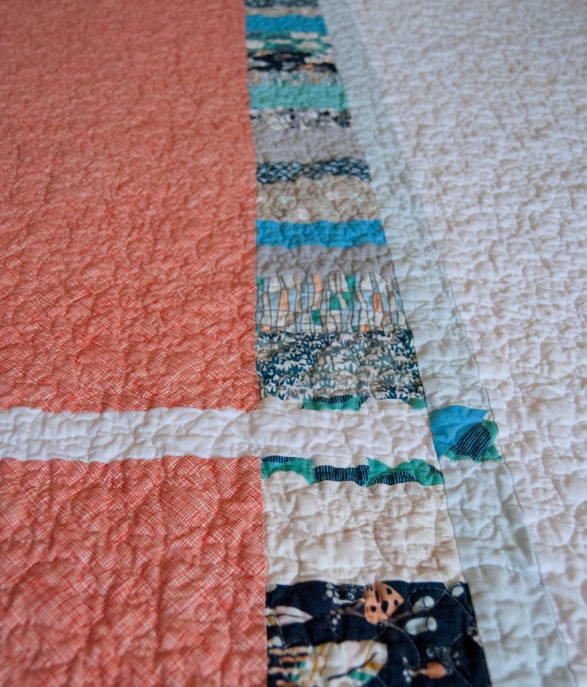 The backing is made up of leftover tiny strips of fabric prints, white and a light-blue stripe of solid quilting cotton, and a print. I did put one tiny HST on the back too, but otherwise used large pieces of fabric. 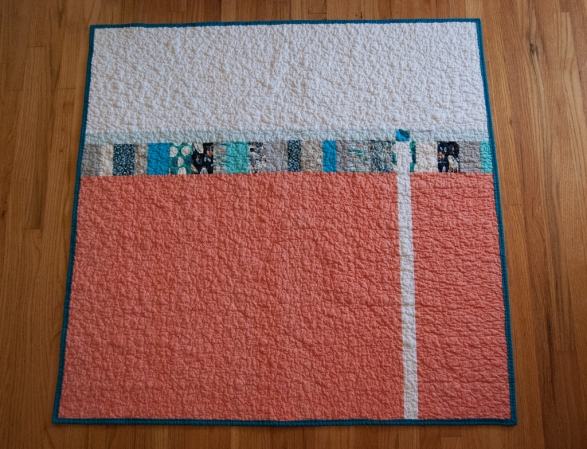 It was certainly a fun quilt to make, and now I have lots of ideas brewing for my next one. How do you plan out your quilts? 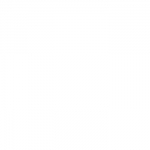 Newer post: How to Make a Tank Top Pattern, Part 2 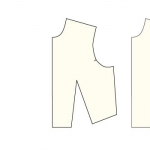 Older post: How to Make a Tank Top Pattern, Part 1