Once you have your plaids cut out, what’s the best way to make sure that the stripes, lines and checks line up? By pinning or basting, of course! There are a few different techniques for matching plaids, and the one you choose to use can be determined by the shape you’re trying to piece together, and also by the complexity of the plaid pattern you’re trying to match. I’ll show you two of my tried-and-true favorites.

The first one is pin basting. It may look like the easiest way to match your plaids before sewing them, but it can be the most frustrating method sometimes. Pinning on sleeves so that they don’t shift when you sew them? Not so fun. However, this an easy way to match up straight seams.

Place your pattern pieces so they’re laying with right sides together, and try to generally match up the lines in your plaid while you do this. Identify the “main” intersections in your plaid along your seam line. Place a pin straight down thru the fabric along this line or intersection. 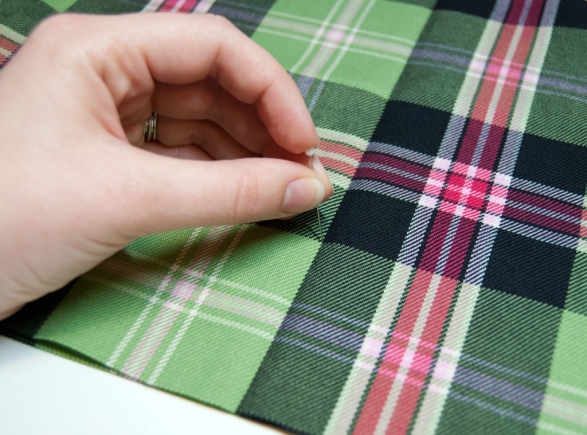 Find the corresponding intersection or line along the other garment piece, and place the pin straight down thru it as well. 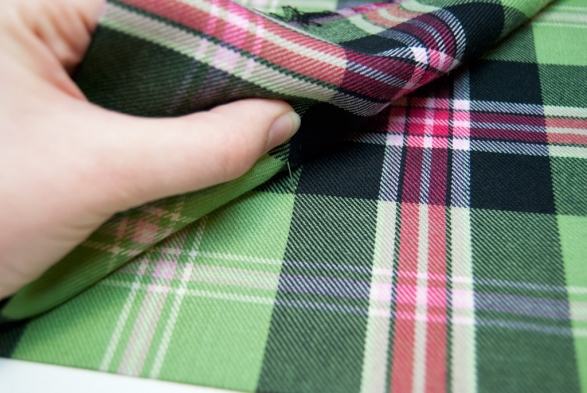 Once you’re happy that the pin is in both pieces of fabric correctly, you can then lay the pin on its side and bring it back up thru both layers of fabric along the same plaid line. Continue to pin along your piece this way until the entire seam is ready to be sewn. 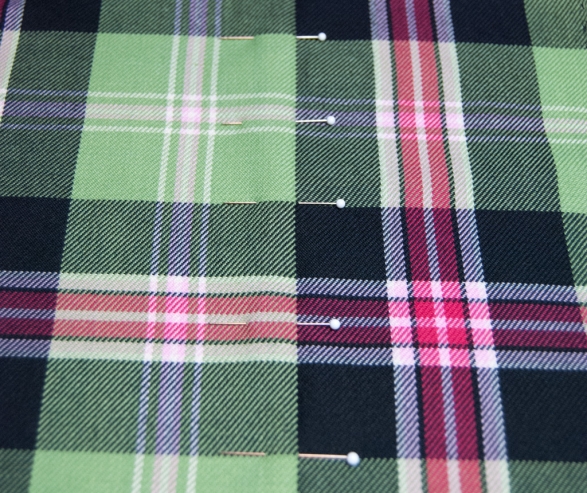 There’s still a chance that you’ll have fabric shift with pinning. If you really want to make sure your seam is precise, then you should baste your pieces together using a simple slipstitch. 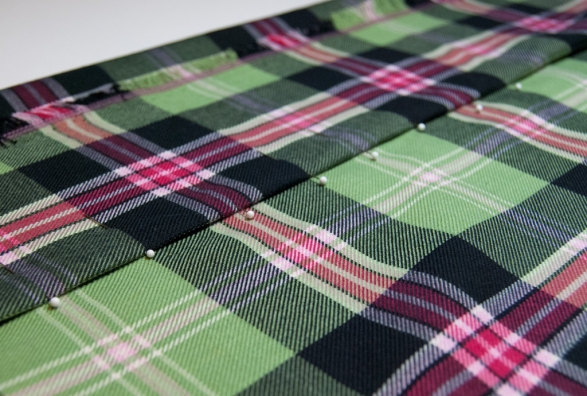 You will begin sewing at the right side of the piece, so that the of the fabric is on top and facing you. Bring the needle thru the foldline, and then take a small stitch of two or three threads from the piece directly under the fold of the fabric, right where your needle came out of the fold. Slip the needle back into the fold for about 1/4 of an inch, and continue to work towards the left. 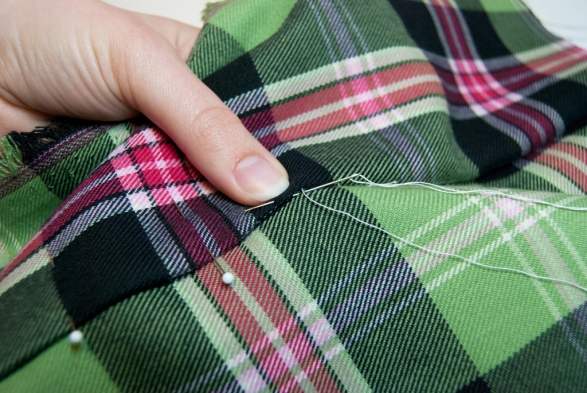 Once you have basted the entire seam and removed the pins, open the seam allowance so that the two fabric pieces have their right sides together. You will have a beautifully basted seam line that you can sew right next to on your sewing machine. After you have stitched it, you can remove the basting and your plaid will be beautifully lined up. 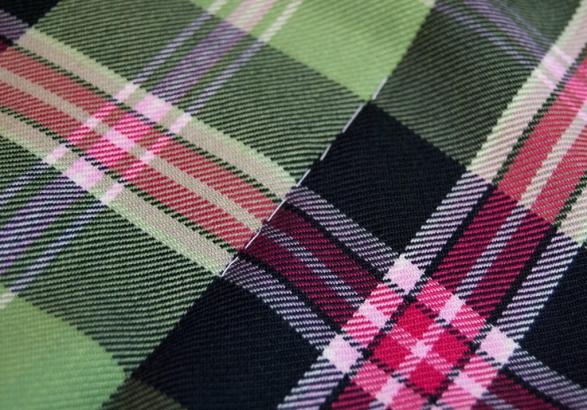 As with all sewing and pinning (or basting) there is a slight chance that your fabric may shift. This can be from tight thread tension, pulling on the fabric, off-grain fabric, foot pressure, and a host of other issues. When sewing a garment that has to match up, I would recommend that you use a walking foot (most often used for quilting) to help guide your fabric evenly thru your machine. If you don’t have a walking foot, consider lightening your foot pressure so the fabric has more room to move under your standard foot.

I wanted to share with you two poor examples of plaid matching that are currently residing in my closet. One shirt is mine, and it’s an inexpensive flannel I picked up at Target a while ago. The other shirt is a blue plaid from JCrew that belongs to Rob. Neither one is a shining example of plaid matching! 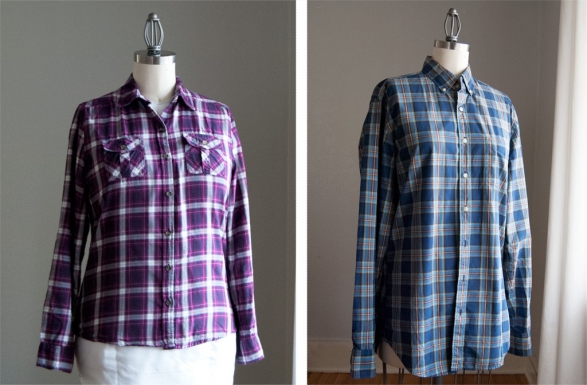 It’s weird to see Rob’s shirt on my female dress form. I promise this shirt doesn’t make him look like he has man boobs when he has it on!

Let’s start with the purple shirt. I think I got it for about $7.00 on clearance, so I wasn’t expecting anything spectacular, and I sure didn’t get it! I’ve only worn this about three times, and honestly it’s because the plaids don’t match (that and it doesn’t fit well). Does that make me a brat? Let’s look at the shirt front. 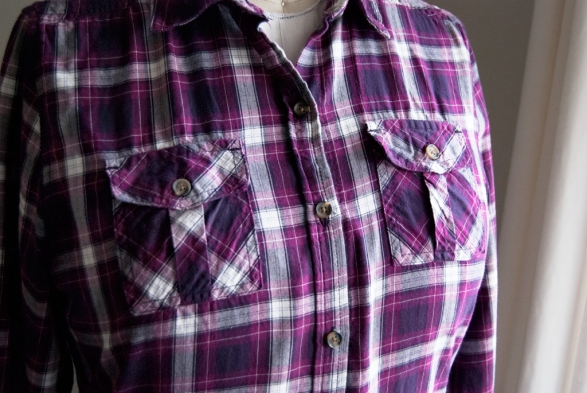 Okay, so the company matched the front band on the shirt, but guess what? They cheated! That isn’t a separate sewn-on band, it’s an extension of the front of the shirt. All they had to do was fold it over, and *BAM*, the front band matches. But look at those pockets. Do they match? They’re on the bias, which is fine, but the patterns on each of the pockets should match. I’m wagging my finger with a big “un-uh, giiiirl” on this one.

My #1 biggest complait about mass-produced plaid shirts is this: 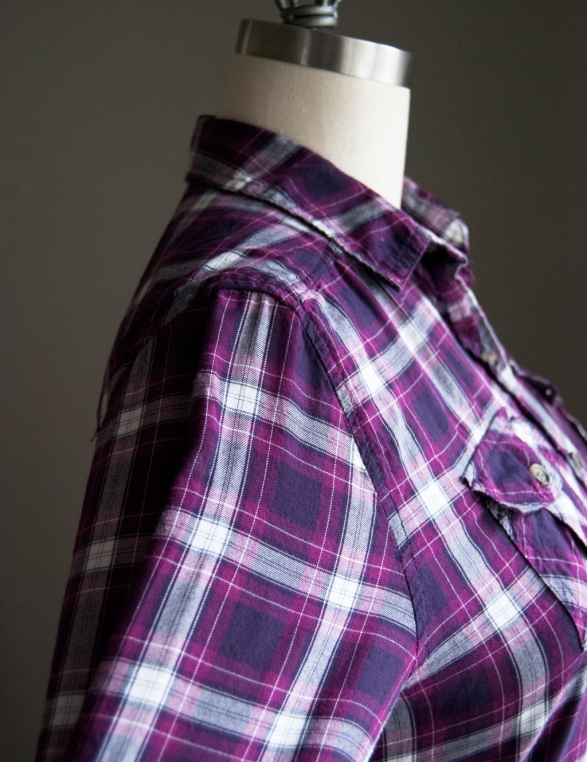 AAAHHHH! These sleeves kill me. If the manufacturer would have been willing to lose out on a bit of fabric (and therefore, money), they could have adjusted the sleeve pattern to be cut out so that the plaids matched on at least the front of the shirt. That requires planning, more work on the part of the patternmaker, and experienced seamstresses, but for me, I’d be happy to pay more if the shirt had those high-quality details. Yes, I know this means I shouldn’t buy things at Target (it was a bad impulse buy).

Now let’s move onto Rob’s JCrew shirt. His cost more than mine, but I’m honestly not sure how much he paid, since he’s owned this for a while. The front of the shirt looks better than my $7.00 find, which is good since it’s a higher-priced item sold to a target market that likely cares somewhat about garment details. 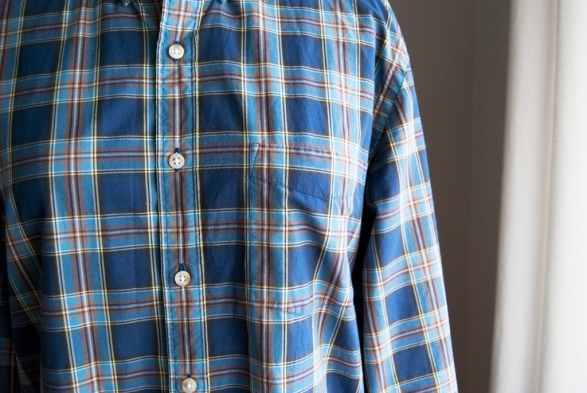 The band is still a front extension that’s folded and sewn down, but that’s completely fine with me. They made sure the pattern and the plaid worked well together, so that the pattern could continue uninterrupted across the front of the shirt. Can you see the front pocket?  It’s nicely matched and great care was put into cutting it out, pressing it and sewing it on so it matched well. Too bad that’s where the good details end. 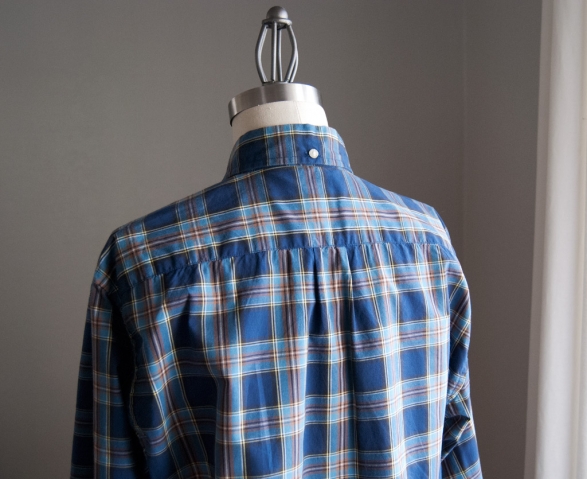 I won’t get into the sewing on the back yoke. I gave this shirt a light press, but someone had their bobbin tension set waaay too tight when they sewed this. But, even with the tuck that is usually put on the center back of a men’s shirt, the plaids are far from matching, and have been shifted to one side. And that collar? The plaids should fall down the collar and run to match the back plaid stripes. The only thing that button is holding on is SHAME.

Are you ready for this though? 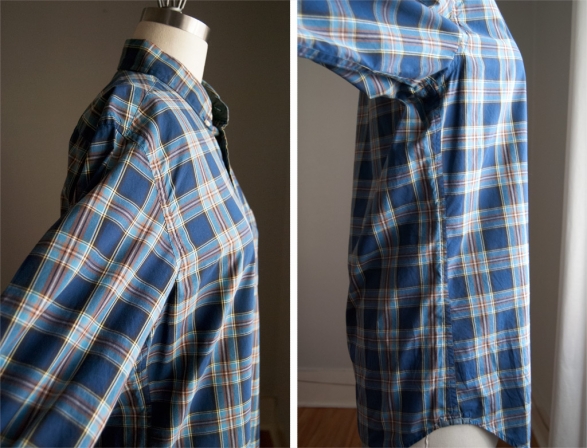 AAAAAAHHHH! The sleeve doesn’t match up (of course), and the side seam is terrible. The side seam on my purple shirt was just as bad, but for the higher price point, I would have at least expected that the side seams would match.

If I had the money to buy much, much higher price point clothes, then I’m sure that I could buy shirts with plaids that match much better. However, if I can make them myself and be guaranteed to never feel like yelling at another plaid shirt side seam again, then I save both frustration AND money! Hooray!

See the other plaid posts here! 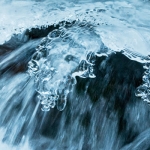 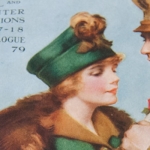