Hello! I am alive over here, if not just barely keeping my head above water most days. I am sloooooowly getting back into the groove of sewing. Emmerich has begun to fall into a nap time schedule (knock on wood), which has given me a little bit of time to myself during the day. After I put him down for a nap, I usually come out of his room looking a wild animal, quickly scanning the house for anything that has to be attended to right away. And lately, I’ve decide that the only thing that needs attending to is my sewing machine, because this Mama is not happy if she’s only done laundry and dishes and housework during her short daily breaks.

I LOVED all of the suggestions everyone gave me in the comments on my post about future project ideas. It has helped me to stop thinking of getting an entire project done in one sitting, like I used to, and instead break it into manageable chunks that I can pick up here and there. I feel like it finally took the pressure off, and I have learned to be fine with only sewing in half of a zipper, or maybe cutting out just two pattern pieces before the baby wakes up. 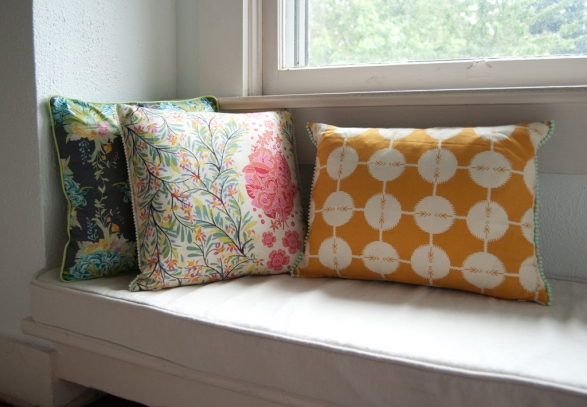 I used a few of his nap times to make a seat cushion and three pillows for a window seat we have at the top of our stairs. Most everything I used I had on had, except for the fabric for the seat cushion. You know how expensive foam is? Ridiculous. Well, my friend told me about camping foam, sold at our local Fred Meyer. It’s made to sleep on top of, but it was only $20 for a piece a little bit smaller than a twin bed. It’s really dense, so I’d say it compares to the $100 foam at Joann Fabrics. Score! I sewed the cover out of a cotton twill and made piping to match, so it was sort of a pain to make. The pillows were easy-peasy though, and used up little bits of mini pom-pom trim I had and three odd colors of invisible zippers that’d been in my stash for years. Now we’ve got a bit of spring color in the house, and it’ll pop even more when we get the trim painted (yeah, don’t look too closely at that awful 70s light peach hue).

There was another project that I really wanted to get to, but it probably took me 2 weeks to finally complete. 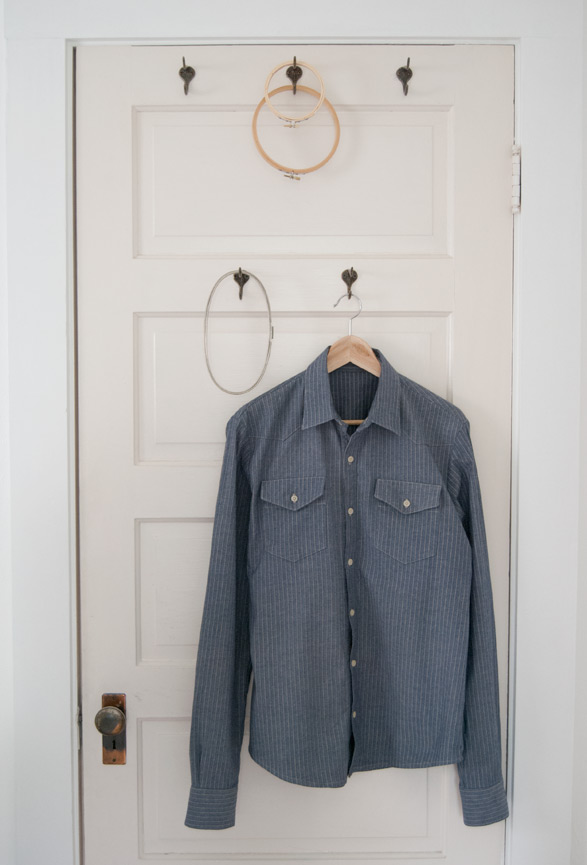 For a few years in a row, I have made Rob a birthday shirt out of McCall’s 6044. I always lengthen the sleeves a good 4 inches, and this time instead of doing a two-piece sleeve with a vent along the sleeve seam, I changed the pattern to a one-piece sleeve and used a placket from Vogue 8889 for a nicer finish. The best part of sewing this up? Not having to cut it out! It’s actually been cut out and waiting to be put together for probably a year. Rob cut it out when he was going to learn to sew his own shirts, and lucky for me, he never found the time to finish it up. I told him that from now on, if he cuts out the shirts, I will sew them. 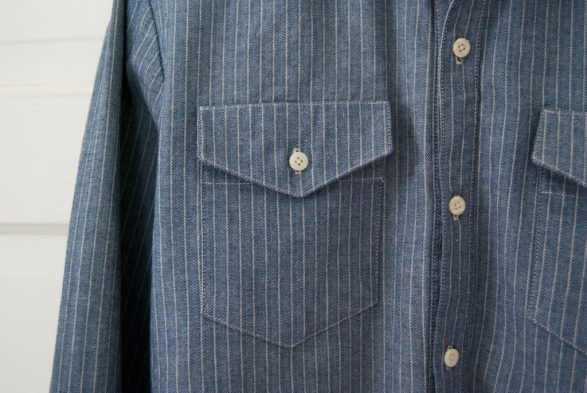 He did a pretty good job of matching up some of his stripes, but it was a bit fiddly to cut out since this reversible railroad denim has stretch to it. 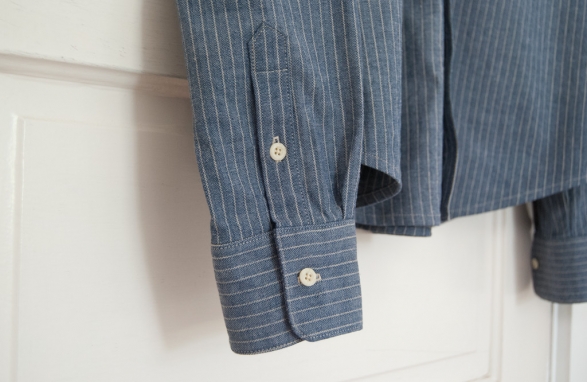 I like this pattern so much better with the placket! It always bothers me when a sleeve vent is created by using the seam on a two-piece sleeve. It feels sloppy, no matter what kind of finishing I do to the seam allowances. This is much cleaner and looks more professional. 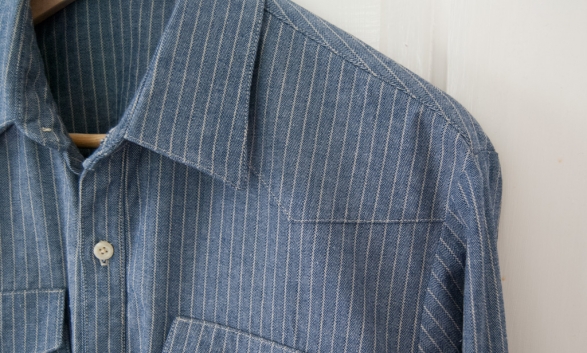 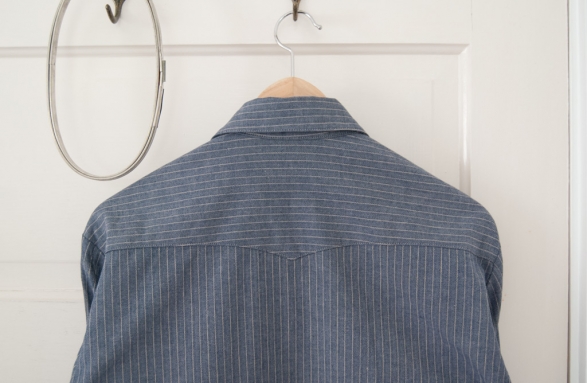 Cutting out the back yoke so it went a different direction was a good call on Rob’s part. It looks nice that the stripes follow the bodice fabric on the front, and visually it’s nice to break up the stripes by running them horizontally on the back.

There was one other quick project that was thrown into my machine the other day. Emmerich had outgrown a sunhat we had for him, so I used the free Reversible Oliver+S Bucket Hat pattern to make sure he had something to shield his eyes from our lovely spring sunshine. He’s such a cute little noodle! 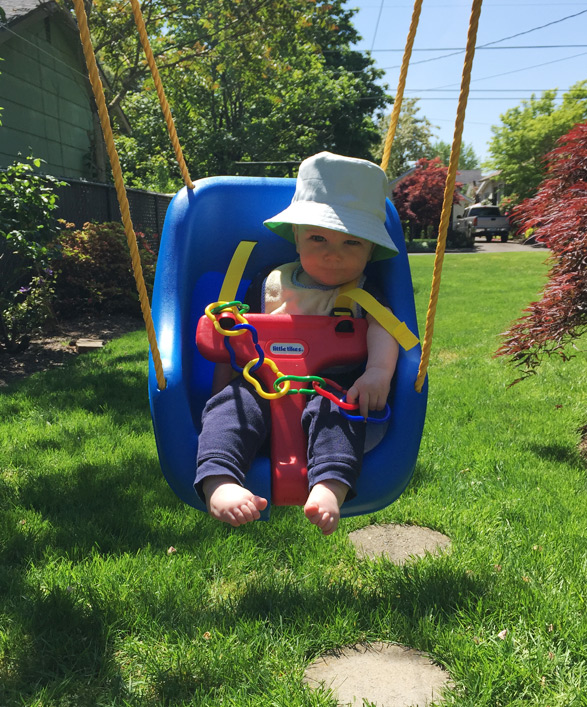 Can I say that I cannot believe he is SIX months old already?! Where is the time going? 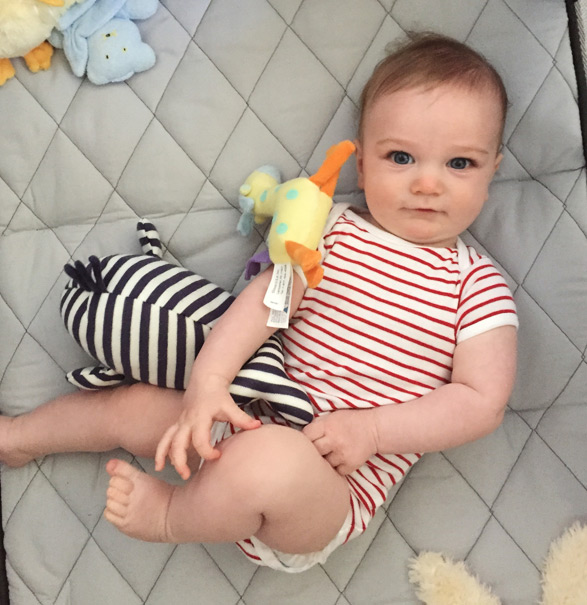 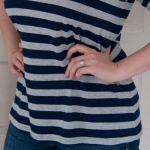 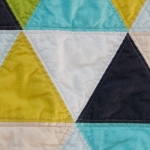