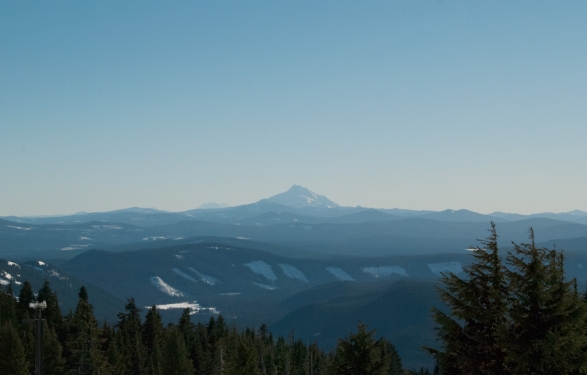 I had needed a break for a long time. Rob and I had each been working on lots of different projects, and between the holidays and other stress, we both needed a change from our routines to unplug and take a little vacation. Neither of us wanted to travel very far, so we settled on one of our favorite places, Mount Hood.

I took the photo above on our first afternoon on the mountain, at Timberline Lodge. We watched the skiers zip by, bundled in their down parkas and warm mittens, and took in the sights, before heading inside for spiked hot chocolate and a beautiful view of the summit. I was anxious to get going though, as much as I tried to relax. We had reserved a cute little 1930s cabin for the night, and all I wanted to do was sit in front of a fireplace and read.

I knew our place was going to be cute, but gosh. The green slatted wood siding and the wide porch covered in firewood set the perfect stage between two towering fir trees. A blanket of snow on the ground (that I had been hoping for) made everything inside feel even cozier. Rob got to work building a fire while I unpacked our things, and later we nestled down into the couches to enjoy the peace and quiet. 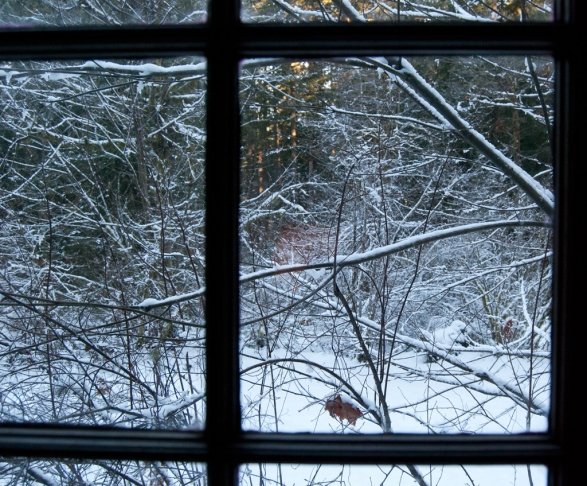 Early the next morning we stopped in Government Camp to pick up our snowshoe sets. Neither of us had been snowshoeing before, but it was something I’d been wanting to try out for years. I had a perfect trail in mind, and I was hoping that no one else would be braving the same trail. The park ranger who we had told of our plans warned us to stay away from where we were planning to go, because it was “way too icy”.

It made us a bit apprehensive, because the trail we were taking was Tamanawas Falls. We didn’t know how much snow would be along the trail, but we thought we’d take our chances since the trail is located on the east side of the mountain. We parked along the road, hitched on our snowshoes, and started into the forest.

The trail started out with a wide path that lead to a narrow bridge that spanned the East Fork of the Hood River. The snow and ice on the river had me hoping that the falls would be somewhat frozen. 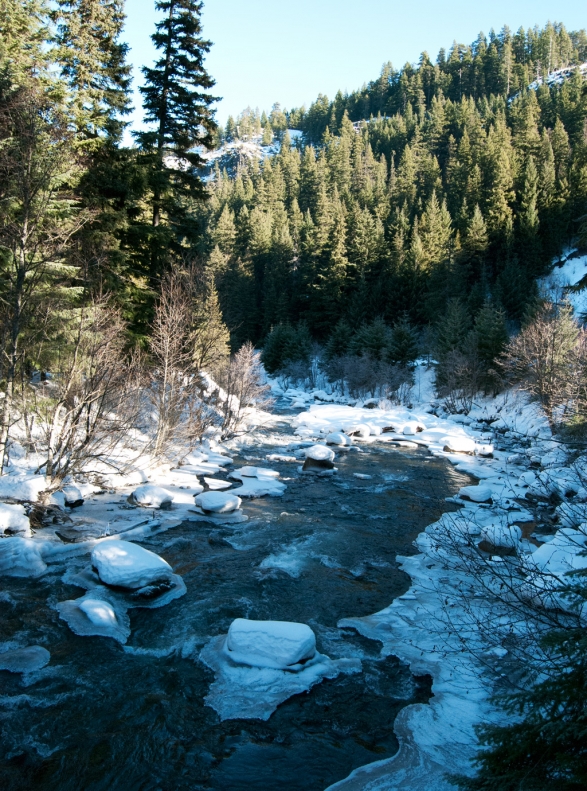 I began to cross the footbridge. I don’t normally have a fear of heights, and I wasn’t feeling apprehensive about crossing. But a little more than halfway across, I noticed that the guardrails were missing from both sides near the end of the bridge. Some of the walkway had obviously been recently broken as well, and I couldn’t tell if the bridge was still okay to cross. I sucked in my breath and pushed back to Rob, getting off the bridge. He pointed out that the underside of the bridge was actually one giant log, and it didn’t appear to be broken. He went ahead and crossed the bridge, and I followed, even though I slipped and almost lost my balance at the broken railings (of course). 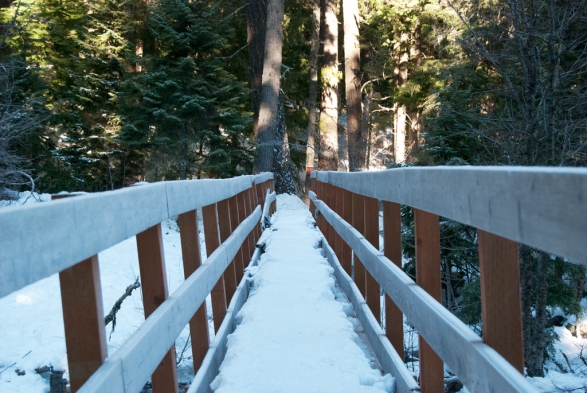 One unnecessary adrenaline rush later, we were on the path towards the falls. It’s labeled as a moderate/strenuous hike on the post where we parked, but many hiking sites had listed it as easy. We weren’t quite sure what to expect, but both of us were glad to have our snowshoes, since the narrow trail was very icy and snowy and slid down steep embankments at some points. 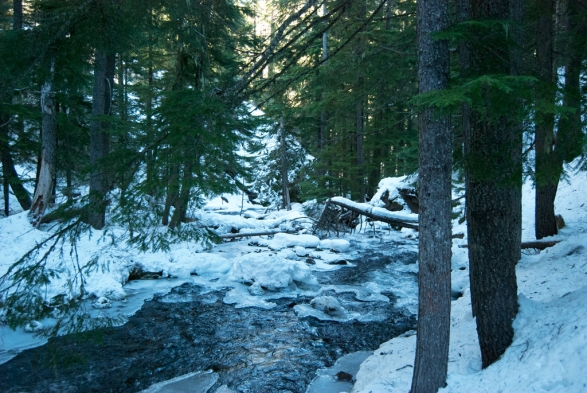 It was quiet in the forest except for the occasional call of a bird and the constant rush of the water we hiked beside. We stopped often to look at the incredible views that surrounded us. I did my best to think of nothing but that moment, to take each one in and savor where I was. I felt incredibly grateful and realized that I been holding on to so much stress and anxiety that I hadn’t even realized how heavy my shoulders had been feeling. This hike was more about letting go than being outdoors for me. Letting go of hurt, anger and sadness that had crept into the corners of my brain. 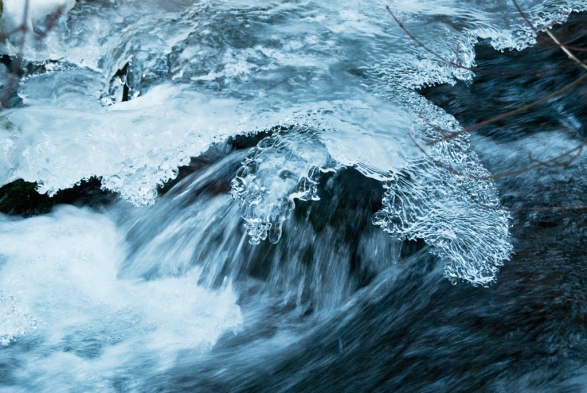 Each time we stopped I took a deep breath of the cold air. When it whooshed out of my lungs, I told myself to let go of every bad feeling in my body. 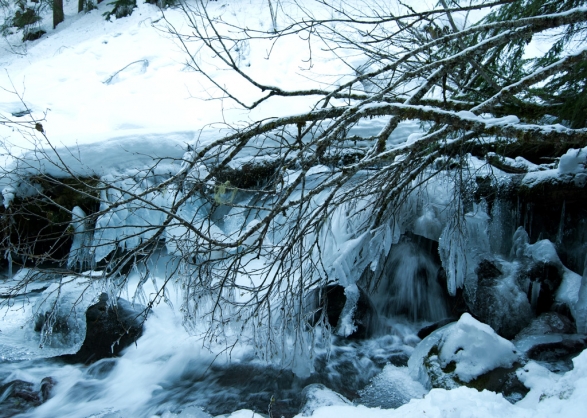 We hiked and enjoyed that we were the only ones in this magical spot. The trail got steeper as we neared a recent avalanche, and then a lone hiker pushed past us as we stopped to grab granola bars. I was grateful when he came right back a few minutes later, because it meant we didn’t have much farther to go, and I could selfishly enjoy the falls with only Rob. 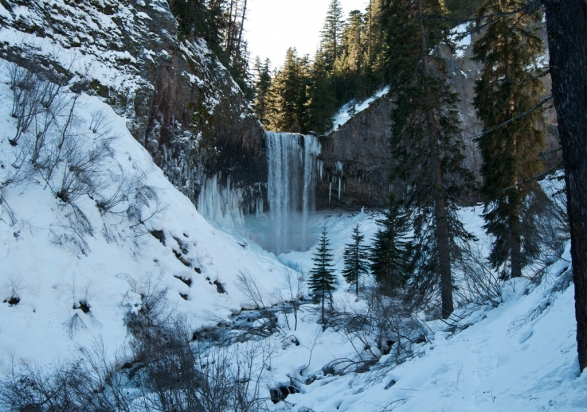 The falls were huge, and the way that the water crashed into the icy bowl it had made covered up every other noise in the gully. We walked on, wanting to get as close as we could to the water. 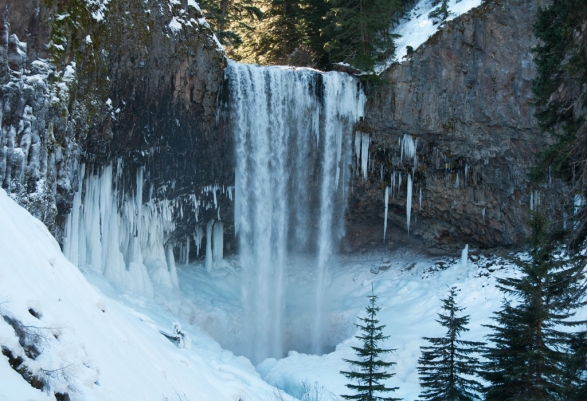 A fine mist hung in the air, coating everything in a shining layer of clean ice. The blue tones in the frozen snow were beautiful, as as much as I wanted to get closer to the icicles, I didn’t dare walk too near when I couldn’t tell where the rocks stopped and the water began. 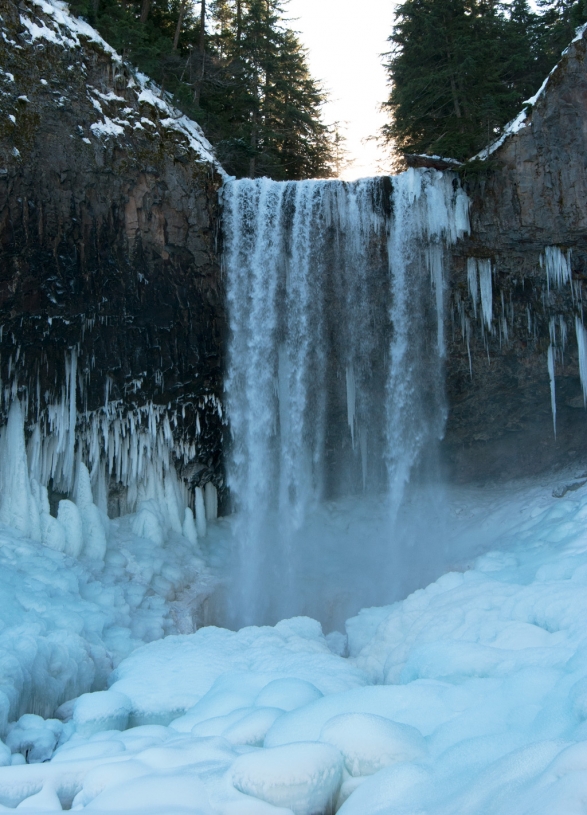 The sun peeked overhead and illuminated the very place in which we were standing. We ate lunch and quietly watched the water, until we had become too cold to keep standing around.

The entire way back along the trail I realized how wonderful even this single hike had been. I often forget how much I need to adventure out to clear both my head and my heart. I felt refreshed and joyful as we made it back to our car, incredibly happy and in love. 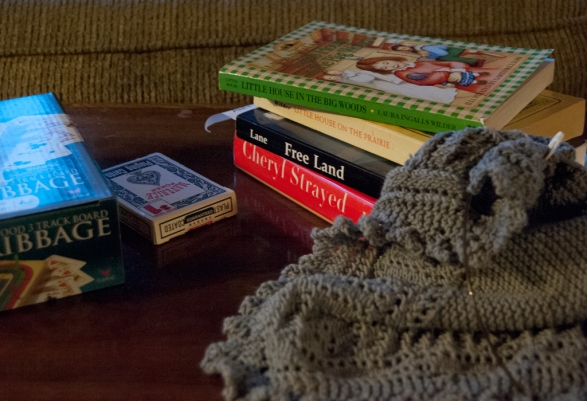 That night at the cabin (after hopping in the hot tub, of course), we settled down to read and I did a little bit of knitting. Can I just express how perfect it is to start rereading the Laura Ingalls Wilder books from your childhood when you’re at a snowy mountain cabin? With the hum of the radio playing 1940s jazz, a pot of beef stew simmering on the stove, and Rob at my side, I sighed a deep sign of contentment. Moments like these are what I’m choosing to fill my heart with now. 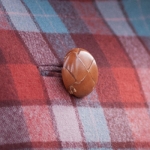 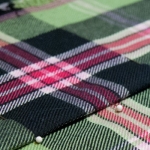